US Ups Award for Information About Kyrgyz Crime Boss

The United States is offering US$5 million for information that could  help disrupt the criminal organization of Kyrgyzstan’s most powerful gangster, Kamchibek Kolbayev, who was arrested in October but suddenly released from pre-trial detention this week. 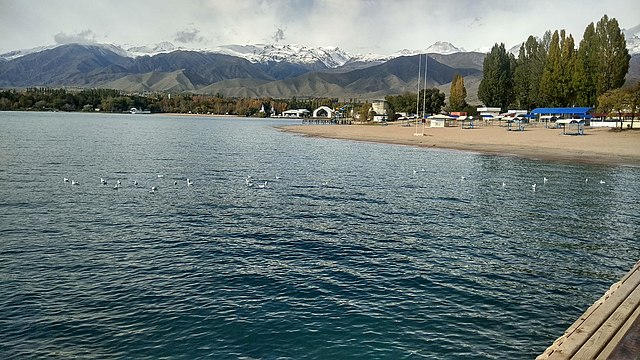 Kolbayev is currently restricted to his hometown of Cholpon-Ata which sits on the shores of Kyrgyzstan's lake Issyk Kul. (Source: Wikimedia Commons)Kolbayev, a convicted murderer, is believed to be the head of an international gang involved in trafficking of drugs, arms and people as well extortion and kidnapping, according to the Department of State.

He has often been credited with streamlining the so-called “northern route” through which heroin and other drugs are smuggled from Afghanistan and elsewhere in Central Asia, through Russia and ultimately on to European markets.

The U.S. had previously offered $1 million but increased the award to $5 million on Thursday after he was released.

Kolbayev was detained last year for organized crime just after the country’s disputed October election which sparked months of unrest in the Central Asian republic. The opposition accused pro-government parties of a vote buying scheme.

The results of that vote have been nullified and in a January election, transitional leader Sadyr Japarov, who was himself in prison before the October polls, was confirmed as the country’s president.

Under Japarov’s rule, so-called “economic amnesty” has been offered to those who had previously benefited from corruption in the country. The law and the electoral unrest caused the country to drop from ‘partly free’ to ‘unfree’ by Freedom House's metric.

However, that amnesty has not been offered to Kolbayev who was released from his pretrial detainment, but is unable to leave his hometown of Cholpon-Ata, RFE/RL reported.

Kolbayev was also implicated in the case of Raimbek Maitramov, a former customs officer who ran a smuggling empire. A murdered former associate of Matraimov described Kolbayev as Matraimov’s “partner and protector.”

The latest detention is far from Kolbayev’s first experience in prison. He was sentenced to 25 years for the murder of his predecessor, Rysbek Akmatbayev in 2000 but managed to escape from prison after six years. In 2013, he was arrested again, but served only a year and a half.

At the height of his power, following the murder of Akmatbayev, Kolbaev was considered a vor-v-zakone, or a “thief-in-law,” a title used by organized criminal groups in Russia and other post-Soviet countries as a type of aristocrat of the underworld.