Reporters without Borders (RSF) has filed a criminal complaint against Saudi Crown Prince Mohammed Bin Salman and other high-ranking Saudi officials for “a litany of crimes against humanity” against journalists, the watchdog announced Tuesday. 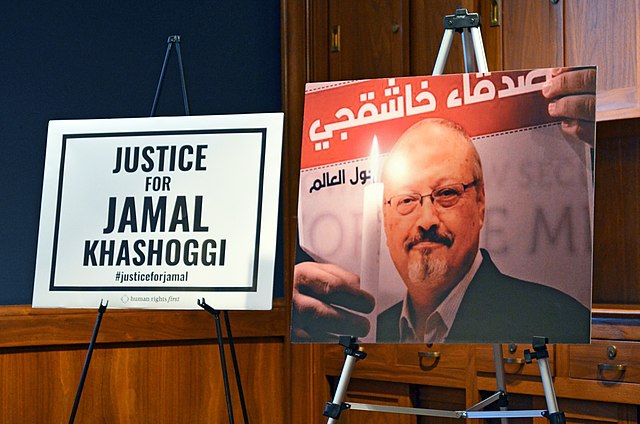 Reporters without Borders (RSF) has filed a criminal complaint against Saudi Crown Prince Mohammed Bin Salman, demanding justoce for the murdered journalist Jamal Khashoggi. (Photo: April Brady/Project on Middle East Democracy, Flickr, License)The complaint, filed with the German Public Prosecutor General, details the “arbitrary detention” of 35 journalists and the widespread and systematic nature of the persecution of journalists in Saudi Arabia, which ranks 170th out of 180 countries in RSF’s World Press Freedom Index.

The journalists have been subjected to “multiple counts of crimes against humanity,” including willful killing, torture, sexual violence and coercion, enforced disappearance, unlawful deprivation of physical liberty, and persecution, the report said.

The filing comes less than a week after the U.S intelligence released a declassified report finding that MBS approved an operation to “capture or kill” Saudi journalist Jamal Khashoggi, who was murdered and his body dismembered inside the Saudi consulate in Istanbul in October 2018.

The report determined that the 15-person mission to capture or kill Khashoggi in Istanbul could not have gone ahead without the Crown Prince’s permission.

Khashoggi is among the 34 Saudi journalists named in the complaint and whose cases reveal “a system that threatens the life and liberty of any journalist in Saudi Arabia -- in particular those who speak out publicly against the Saudi government.”

Also named is Raif Badawi, a Saudi blogger sentenced in 2014 to 1,000 lashes and 10 years in prison for “insulting Islam through electronic channels.”

Badawi was subjected to 50 lashes in 2015, the remaining 950 of which were postponed following international outcry. In 2020, Saudi Arabia abolished flogging as a punishment.

“If successful, this complaint truly could be a game-changer in imposing concrete costs for the most horrific crimes against journalists,” RSF’s Director of International Campaigns, Rebecca Vincent, said in a Tweet.