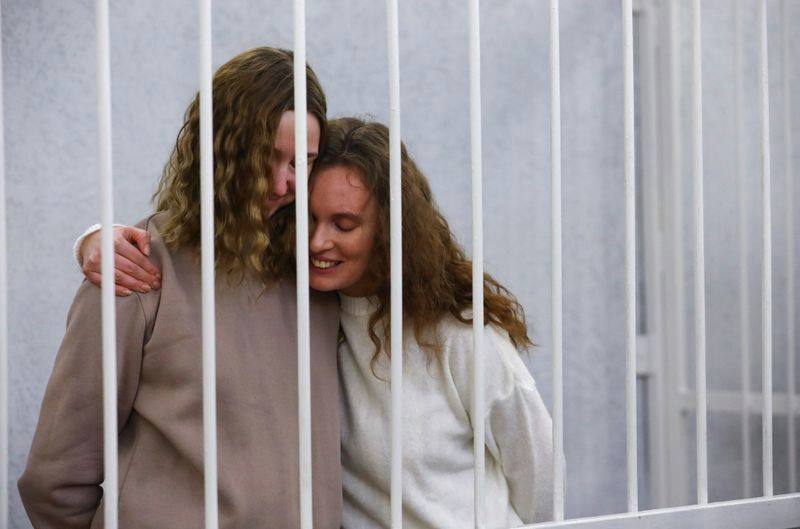 Belsat's camerawoman Daria Chultsova and journalist Katsiaryna Andreyeva, sentenced in Minsk to two years jail. (Photo: Igor Ilyash, Facebook)The Frunzensky District Court in Minsk based its decision on charges that the two were allegedly orchestrating a riot in Minsk on November 15, when hundreds of people gathered to commemorate Raman Bandarenka — an activist who was beaten to death, which the authorities have been denying.

“The sentencing of Andreyeva and Chultsova is one of many ways Belarus’ government has retaliated against journalists for reporting on peaceful protests and human rights violations,” Human Rights Watch (HRW) Coordinator, Europe and Central Asia, Anastasiia Zlobina, said in a statement.

Andreyeva and Chultsova, according to HRW, live-streamed the protest from a nearby apartment for about five hours.

“After police dispersed the peaceful demonstrators, ten riot police officers broke into the apartment, detained both journalists, and seized their equipment,” HRW said in a statement.

Police did not stop there, but also searched Andreyeva’s apartment, her relatives’ home, and the apartment of Chultsova’s parents, read the statement.

Five days after Andreyeva and Chultsova were detained, Belarus authorities initiated a criminal case against them.

Polish President, Andrzej Duda, instructed his diplomats in Minsk to convey to Belarus his “strong opposition to the repression against freedom of speech and civil rights,” his cabinet said. He called for the reporter’s immediate amnesty and for the EU to “respond in solidarity, consistently and resolutely to this subsequent manifestation of suppression of fundamental rights and freedoms.”

Belsat Deputy Director, Aleksy Dzikawicki, also condemned the ruling, stressing that “the regime in Belarus has committed an obvious crime by sentencing the two journalists… to two years imprisonment for performing professional duties.”

“This is not only a violation of international standards, but also of Belarusian law;” Dzikawicki said on Facebook.

Andreyeva and Chultsova are not isolated cases. HRW warned that “at least seven other journalists are behind bars awaiting trial on similar criminal charges,” in Belarus, and that on Tuesday “authorities raided homes and offices of at least 40 journalists and human rights defenders who are promoting freedom of the press.”

The Belarus Association of Journalists (BAJ) said that police thoroughly searched its office, digging even the garbage. Officers seized laptops, cell phones and other equipment. At the same time, they searched apartments of several association’s officials.

“Belarusian authorities must put an end to their relentless harassment of journalists and press freedom organizations,” Deputy Executive Director of the Committee to Protect Journalists (CPJ), Robert Mahoney, said.

Andreyeva’s husband, also Belsat’s reporter, Igor Ilyash, called on journalists in Belarus to tell the truth about the crimes authorities are committing.

“We must tell the truth about the violence in the streets, about the bullying and the torture in prisons, about corruption and abuse at all levels, about the readiness to sell the sovereignty of the country for the opportunity to extend the regime of personal power for even a little bit,” he told Belsat.

He added that the verdict against his wife and colleague ”is not just repression.”

“This is an act of terrorism aimed at intimidating the journalistic community. Let's call a spade a spade: a war is being waged against us,” he said and concluded that the best response would be “more truth, more facts.”