Anti-corruption protesters said on Tuesday they will hit the streets of Nicosia again next weekend despite police brutality seen last Saturday, when 11 people were arrested and riot units deployed water canons and teargas against the crowd, injuring several dozen peaceful demonstrators. 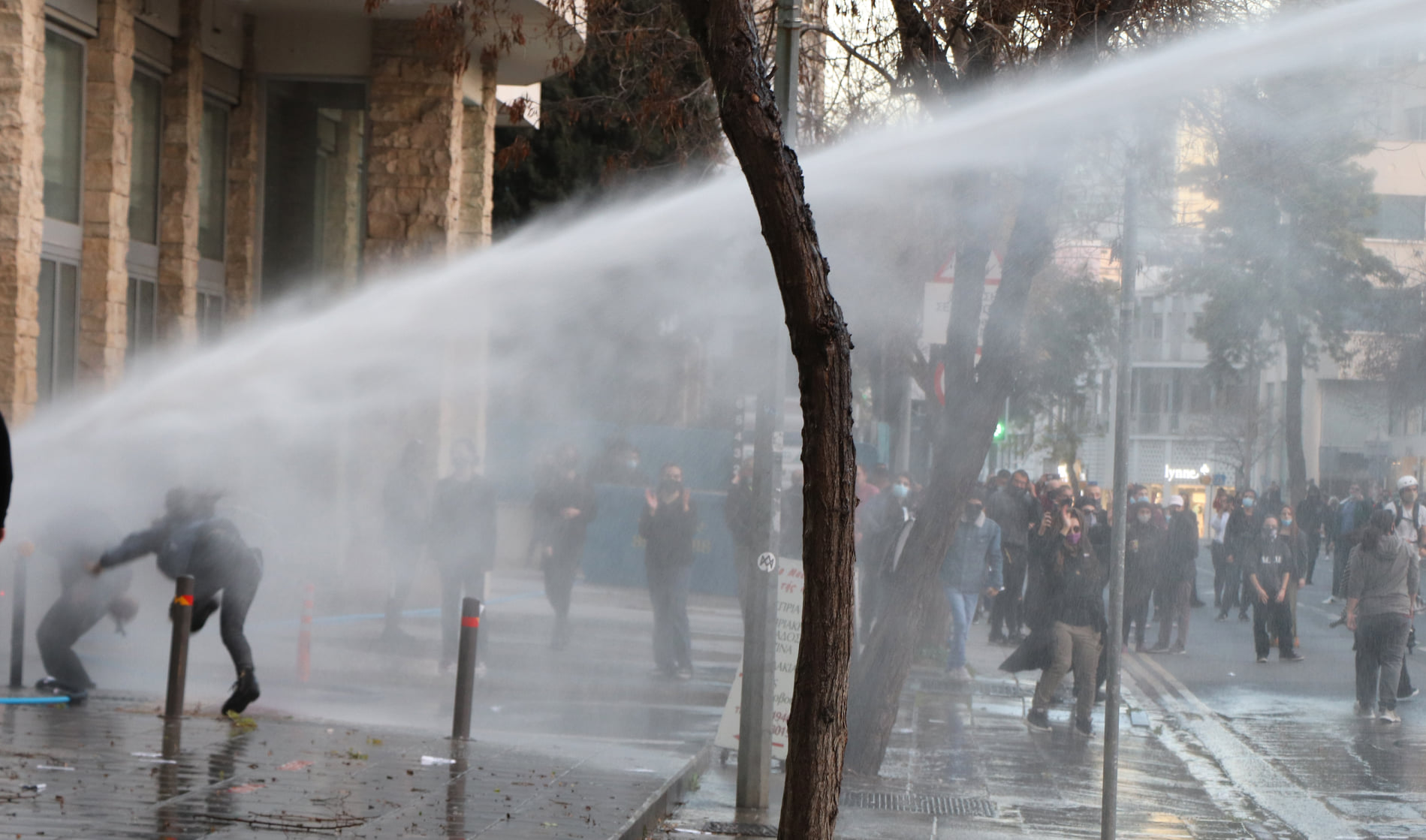 Photo of a water cannon being used by police against Cyprus protesters on a commercial street in the capital of Nicosia (Photo: Hara Hadjiadamou)According to the organizers, made up of members of civil society organizations and trade unions, among the injured was a 25-year-old woman who is at risk of permanent loss of eyesight after being hit with a water cannon.

In a Tuesday Facebook post, one of the protest’s organizers, the Cyprus Leftist Federation Movement, said that “the violent repression and police barbarism we faced… totally justify the reason why we went out onto the streets,” and called for another demonstration next Saturday.

“This is the worst violence that Cyprus has seen since 1974,” said Corina Demetriou, a lawyer who was present at the rally – alluding to a year in which Cyprus underwent a coup d'etat and an invasion by Turkey.

The Independent Authority for the Investigation of Allegations and Complaints Against the Police (IAIACAP) appointed on Tuesday four criminal investigators to probe claims of excessive violence by officers during Saturday’s protest.

The motivation for Saturday’s protest comes amidst a backdrop of public anger of government corruption. A recent survey shows that 72% of Cypriot respondents have noticed a rise in corruption cases over the last several years.

Trying to save face after its golden passport scandal, the government launched an anti-corruption campaign just two weeks ago in which it voiced its commitment towards the rule of law, transparency, and accountability.

Cypriot President Nicos Anastasiades called it “the most sweeping initiative to establish the strongest possible protection network against corruption.”

The plan contains 47 reforms and 27 actions aiming to “improve the political, economic, social and legislative environment” and tackle money-laundering and financial crime, he said.

It also mandates a special financial crimes unit within the police and the establishment of a register of ultimate beneficial owners (UBOs), an already existing obligation under the EU’s 4th anti-money laundering directive.

The President said Cyprus will come up with other incentives for investments instead of its ‘golden passport’ program – suspended on November 1st– which had over seven years injected 9.7 billion euros (US$11.7) billion into the island’s economy but has also contributed to its drastic drop on the Transparency International’s global corruption index (CPI).

“Many of the measures announced by the government sound good in theory,” Sofronis Clerides, a Cypriot professor of Economics at the University of Cyprus, told OCCRP.

“To an uninformed outside observer, they may appear like a good road map, but it is a bit of an oxymoron to have an anti-corruption campaign being launched by a government that has been in power for eight years and is accused – with good reason – of corruption at the highest level,” he added.

According to the Cypriot economist, “it is difficult to take this campaign seriously when politicians, both those in government but also those in other parties, fail to display a basic understanding of conflict of interest.”

He said that any formative moves to address corruption in Cyprus probably won’t come from what he described as an “entrenched government.”

“It could come from a grassroots anti-corruption movement that disrupts the political system, but Cypriot history does not offer much hope that this is possible. A more plausible - but still not highly likely - scenario is for change to be imposed from outside, from EU institutions such as the European Public Prosecutor’s Office” Clerides said.