Myanmar’s military has used rubber bullets, tear gas, water cannons and recently live ammunition against anti-coup protesters who flooded the streets defying a ban on large gatherings. One woman was left with severe brain trauma, according to reports. 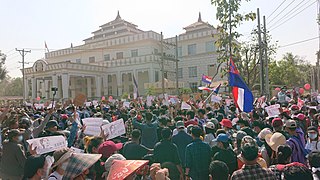 “The UN Security Council should be encouraged to consider all of the options it has previously used to deal with gross human rights violations,” Andrews said.

Since the February 1 military ousting of the civilian government and the capture of President Win Myint and Aung San Suu Kyi, more than 350 people including journalists, students, activists and political leaders have been arbitrarily detained, according to Deputy High Commissioner for Human Rights Nada Al-Nashif.

It has been widely reported that the military junta captured leaders of the opposition at night during the imposed curfew. A number of videos have surfaced online of police violence against peaceful protestors.

In one video an unarmed woman who posed no apparent threat was hiding behind a bus stop with other protestors when she crumpled to the ground after being shot in the head by what was reportedly live ammunition. The 19-year-old girl, Ma Mya Thwe Thwe Khaing, was in critical condition after being taken to a Nay Pyi Taw hospital, according to The Myanmar Times.

“The social media materials we have verified show that police recklessly targeted protesters, with no respect for their lives or safety whatsoever,” said Sam Dubberley, head of Amnesty International’s Crisis Evidence Lab.

Myanmar’s military denied using live ammunition, reported Amnesty International. The human rights watchdog released a photo it says was taken across the street from where Ma Mya Thwe Thwe Khaing was shot, of a police officer aiming a Myanmar-made clone of an Uzi submachine gun.

UN member states who have responded to these attacks on democracy and acts of violence encouraged others to follow suit during Friday’s special session. President Biden announced targeted sanctions on ten Tatmadow leaders and three Burmese companies owned or operated by the military as well as freezing $1 billion in Myanmar government funds held in the U.S.

New Zealand imposed a travel ban on the leaders of the coup and suspended diplomatic relations including its aid program.

“The Myanmar issue is an internal one,” the representative from China, Myanmar’s largest trading partner and supplier of arms said.