Holyrood, the Scottish Parliament, has voted against asking national authorities to pursue an Unexplained Wealth Order against Donald Trump, which would have required the former president of the United States to account for how he purchased two golf courses in Aberdeen and Turnberry. 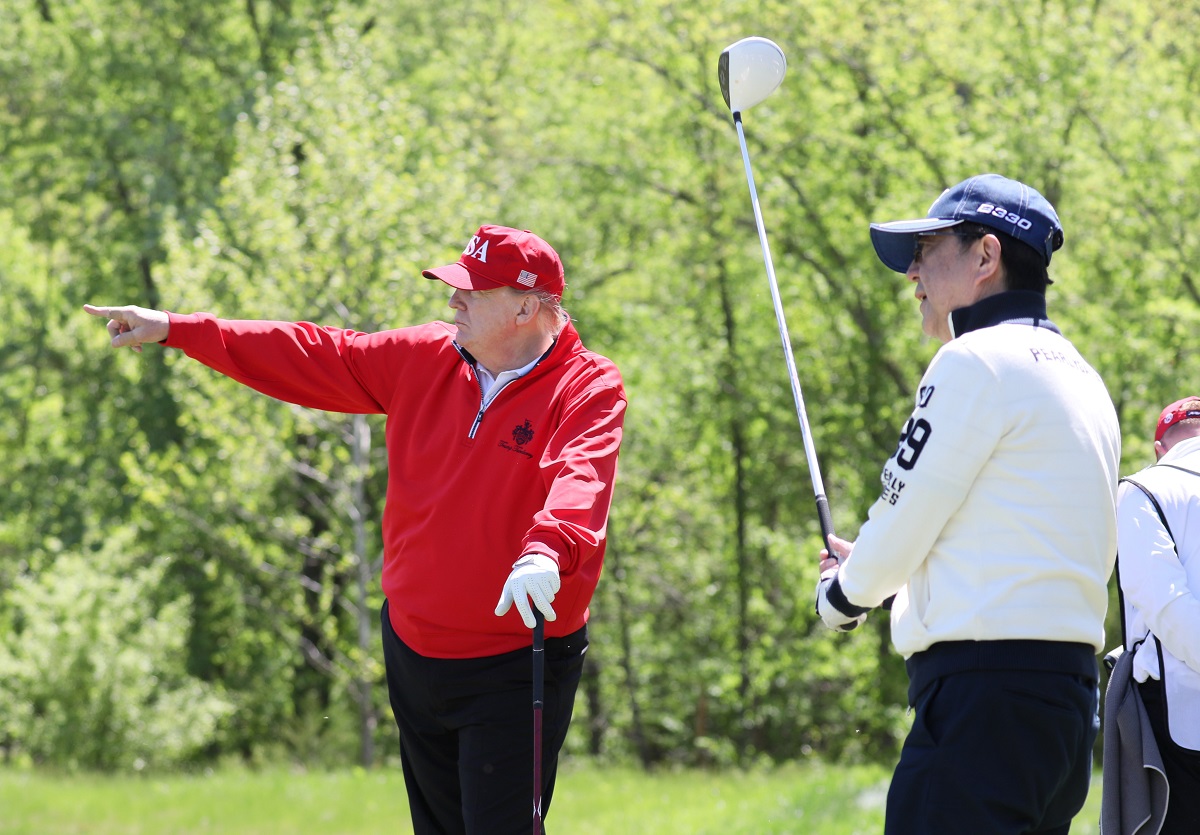 Former U.S. President Donald Trump, pictured with former Japanese PM Shinzo Abe, owns two golf courses in Turnberry and Aberdeen. (Photo: 首相官邸ホームページ, Wikimedia, License)The motion, tabled by the Scottish Green Party on Monday, made reference to a report published in 2019 in which NGO Avaaz not only outlined that Scottish ministers are technically empowered to request that authorities pursue such an action, but also argued that, in Trump’s case, they ought to do so.

The provenance of Trump’s investment in Scotland has long been shrouded in mystery. Much like cash flows through London real estate from controversial figures from within the Russian business community, his golf courses have in recent years served as something of a flashpoint for debate about the United Kingdom’s role as an international hub for dirty money.

However, Minister for Justice Humza Yousef, a representative of the ruling Scottish National Party, said during parliamentary proceedings on Wednesday afternoon that for the Scottish government to instigate an investigative procedure “would be an abuse of power, fundamentally undermining our entire justice system.”

Conservative Party MSP Liam Kerr concurred with Yousef’s assessment, arguing that “whilst the legal opinion may say the government could petition the court… that doesn’t mean that they should.”

“One cannot help but wonder whether to do so would risk compromising the integrity of any prosecution or judicial process, as well as the perception of independence,” he added.

Introduced in 2018, Unexplained Wealth Orders are a relatively underused new investigative tool, allowing U.K. investigators to require owners of high-value assets to account for the origin of their wealth.

If the owners are unable to satisfy the courts that a specific item of property was acquired legally, authorities are then at liberty to pursue confiscation proceedings against the asset.

Having pushed for a formal investigation into Trump’s holdings since February last year, the Scottish Green Party had cited mounting investigative activity in the United States as grounds to apply for UWOs against the former president’s financial holdings in the United Kingdom.

In particular, the party cited a request submitted by the American Democracy Legal Fund to the Federal Bureau of Investigation, in which it asked officials to probe “apparent inconsistencies, misstatements, and lies in President Trump’s annual financial disclosures filings regarding loans to, and the profit margins of, his golf courses in the U.K. and Ireland.”

Co-leader of the party, Patrick Harvie MSP, said during proceedings that Trump’s “purchases in Scotland were part of a very long spending spree, with his spokespersons claiming he had vast sums of money sitting around available for investment, while at the same time he was apparently being turned down for credit [in the United States].”

“Even before Trump’s candidacy or presidency, he was known throughout the world to be an untrustworthy, dishonest, racist conspiracy theorist. This was never someone we should have wanted to associate Scotland’s good name with,” Harvie added.

Yousef noted that “as a person of colour, as a Muslim… you’ll find no defence of Donald Trump from me,” but that to have a system which could be influenced by “how disliked [a person] is by a particular government is not one that a society which respects and seeks to uphold the rule of law should aspire to.”

In the immediate aftermath of the vote, Labour Party MP Alex Rowley took to Twitter to denounce the Scottish National Party (SNP) and the Conservatives, who make up the overwhelming majority in the Scottish parliament, for “teaming up and voting together to stop progressive action from taking place.”

During proceedings, he accused the SNP of “hiding behind the law,” having “courted” Trump in the past, in order to avoid scrutiny of the former president’s relationship with the United Kingdom.

The ex-president’s son Eric Trump reportedly lashed out at the proposed motion late on Tuesday, describing Patrick Harvie as a “national embarrassment” whose “pathetic antics… only serve himself and his political agenda.”

“If Harvie and the rest of the Scottish Government continue to treat overseas investors like this, it will deter future investors from conducting business in Scotland, further crushing their economy, tourism and hospitality industries,” he was further quoted as saying.

After leaving office on January 20, Trump is now facing impeachment proceedings and a raft of possible further prosecutorial actions in the United States relating to his financial activities and allegations of sexual misconduct.

Against the backdrop of a forthcoming trial in the U.S. Senate for his alleged role in inciting the mob that stormed the Capitol building in Washington D.C. on January 6, authorities are understood to be investigating possible insurance, real-estate and bank fraud at the Trump Organization, as well as allegations the former leader unduly profited from his time in office.

Since 2016, he has fended off allegations of rape and sexual assault from multiple women, and is at present facing a civil case reportedly launched by his niece Mary Trump, in which she claims that he and two of his siblings previously muscled her out of her inheritance and interests in the family business.