In a massive operation throughout 35 different locations in Sarajevo and central Bosnia on Wednesday, authorities detained 14 people suspected of organized crime, money laundering, fraud and business fraud, as well as abuse of power. 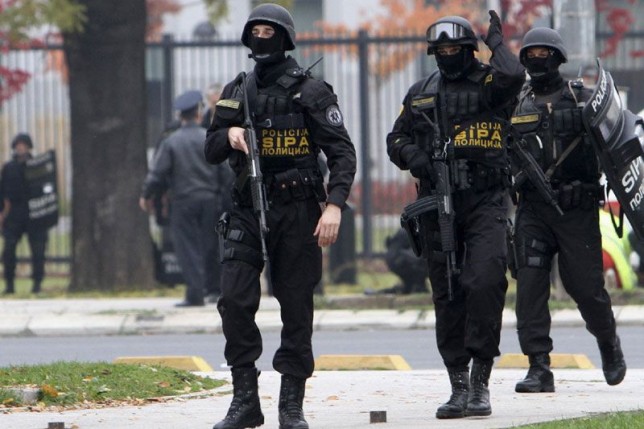 Bosnia's law enforcement agencies in a massive operation targeting organized crime, money laundering. (Photo: SIPA)The former Chairman of the Securities Commission of one of Bosnia’s two semi-autonomous regions, the Federation of Bosnia and Herzegovina, Hasan Ćelam, the commission’s ex-associate, Edin Dizdar, as well as a controversial Sarajevo businessman Zijad Blekić, the former head of the Sarajevo Stock Market Supervisory Board and owner of the now-defunct Eurohaus brokerage firm, were among those detained.

The Cantonal Prosecutor’s Office of the Sarajevo Canton called for the operation following a years-long investigation into suspected organized crime and money laundering involving the Securities Commission of the Federation of Bosnia and Herzegovina.

The office said that 18 people, acting as a group, have been suspected of “conducting fictitious agreements, loan agreements and cessions, by exploiting positions in several companies.”

“They are also suspected of officiating manipulative actions on the securities market and making multi-million transactions… through which they gained some 30 million Bosnian marks ($18.53 million) in illegal profit,” according to the Prosecutor’s Office.

Bosnia and Herzegovina's State Investigation and Protection Agency (SIPA) said that “searches of individuals, homes and offices, including 16 people and nine companies, have continued in Sarajevo, Breza and Travnik.”

During the operation, codenamed “Profit,” police seized “€744,800 (US$899,914), 89,400 Bosnian marks ($55,235), certain amounts of Croatian kunas and Serbian dinars, as well as extensive documentation and other items to be used as evidence in criminal proceedings,” SIPA’s Spokesman, Luka Miladinović, told OCCRP.