One of the highest ranking members of Group America, a prolific US-Serbian drug gang, may soon be set free from his prison cell in Peru after a criminal court of appeals ruled that he was denied due process, local media reported on Friday. 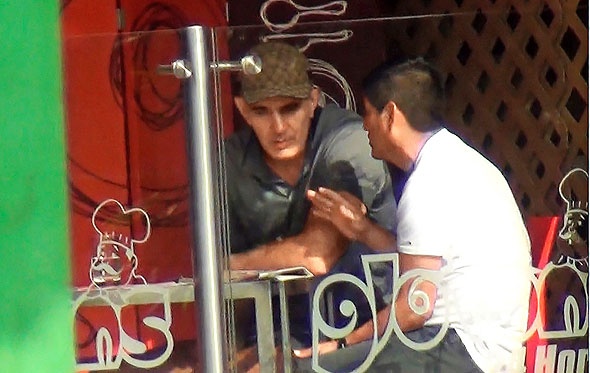 Zoran Jaksić during a meeting in Lima, Peru, as captured by police. (Photo: Peru National Police)Zoran Jaksić, 61, was arrested in Peru in July of 2016 after evading justice for years through the use of 40 identities. He was sentenced to 25 years in jail, but appealed the ruling and was granted a retrial after an appellate court found that the judge had been impartial.

The burly Serbian trafficker, who stands at over two meters tall, along with eight others investigated, has been issued three months of house arrest in the interim.

As detailed in an OCCRP investigation, Jaksić was discovered by Peruvian police as part of a longer-running operation targeting a group of home-grown drug traffickers. When they identified him, they realized that they had uncovered a much more high-profile criminal.

“We had no idea such a big player was involved,” a police official told OCCRP in September. “We don’t have players like him in Peru. He is the Champions League.”

After being apprehended and incarcerated, an OCCRP journalist visited him in his cell, where she discovered that his financial resources afforded him amenities that include two smartphones, allowing him to continue to manage his drug operation.

“You can buy everything here. I have a television. They bring me all the food I want from outside. A bottle of whiskey costs a hundred dollars, plus bribes,” he told her.

Jaksić, if released, has an extradition request from Greece over a 2007 drug trafficking charge. He also faces trial in Italy for his alleged involvement in a drug smuggling operation relying on a cruise ship that picked up a shipment in Venice.

His long history of evading authorities is part of his gang’s larger documented history of impunity.

Group America’s alleged leader, Mileta Miljanić, continues to live freely in a townhouse in New York City, despite also being a wanted man in Italy.

One senior police source has attributed the organization's success to its ties with security services and intelligence agencies – perhaps even the CIA.