A Croatian court sentenced on Friday the country’s former Prime Minister Ivo Sanader to eight years in prison for syphoning state-owned assets through a private marketing company, keeping some of it for himself and putting the rest into his party’s secret slush fund while he was in office. 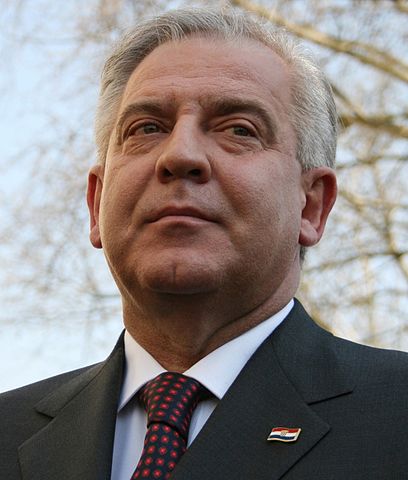 Ivo Sanader, Croatia's ex-Prime Minister, sentenced to eight-year-jail for corruption, embezzlement. (Photo: Roberta F., Wikimedia, License)The ex-PM, who also led the ruling Croatian Democratic Union, HDZ, at the time, can still appeal the verdict of the Country Court in Zagreb, which concluded that Sanader also illegally made HRK275,000 (US$42,900) and that, should the verdict be upheld, authorities should confiscate from his family HRK15.8 million ($2.5 million) because he could not explain how he earned them.

“With his behavior, Ivo Sanader roughly and recklessly was abusing his power,” judge Irena Kvaternik said delivering the verdict.

She added that Sanader had an “insatiable need to pile material goods at the expense of the Croatian citizens, including those who elected him.”

Sanader, however, is not the only one to be fined. The court ruled that the HDZ has to pay a HRK3.5 million ($546,500) fine, as well as HRK10.3 million ($1.6 million) to the country’s budget, as the court deemed that the political party illegally gained more than HRK14 million ($2.2 million) thanks to Sanader.

Fimi Media, the company he used to siphon the money through, was also ordered to pay HRK11.9 million ($1.85 million) if the judgment is upheld.

Using his authority as prime minister and the HDZ president, Sanader had authorized Barišić to promote Fimi Media among state and public institutions. Barišić also hired the firm to handle HDZ’ bills for catering and other services from 2005 to 2009.

From the money Fimi Media would get from the state budget, the company’s late owner Nevenka Jurak would pay the HDZ party’s bills, keep some money for herself, hand over some cash to Mladen Barišić who would then give a sum to Sanader. The former PM would keep a portion of the sum and hand the rest to the party.

The HDZ financial clerk Pavošević has not kept records of the money, as Sanader allegedly told her, but would use money for various purposes, like Sanader’s trips or expensive suits.

Croatian independent news outlet Index reminded that the court will also seize Sanader’s property, including assets at numerous bank accounts belonging to his family members in Croatian and foreign banks.

Both, the prosecution and the defense said they will appeal to the verdict.

In another case, Ivo Sanader was a year ago sentenced to six years in jail for his role in a corruption scandal involving the Hungarian energy group MOL.