A group of Kyrgyz parliamentarians elected a former lawmaker as the country’s new prime minister on Saturday, days after his supporters freed him from prison during anti-government protests that erupted after last Sunday’s elections. 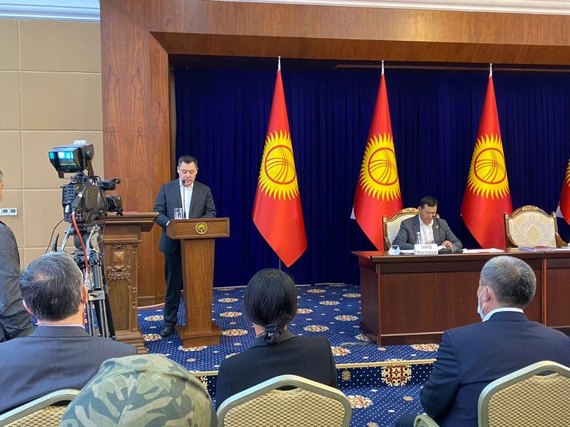 Sadyr Zhaparov, disputed PM of Kyrgyzstan. (Photo: Kloop) Sadyr Zhaparov was elected at an emergency session, but his appointment is being disputed by several MPs and lawyers who claim the voting was not legal and that he is being installed by an organized crime group.

They say a quorum of 61 lawmakers was needed for Zhaparov to be elected but that there were only about 45 of the 120 MPs present and that numerous other procedures were violated.

Zhaparov’s election was supposed to calm down the chaotic situation in the country caused by the week-long protests over an election undermined by allegations of rampant vote-buying. The crowd in Bishkek clashed with police and seized key governmental buildings last Monday in an overnight uprising.

Election officials declared the results void but in his speech in front of lawmakers, Zhaparov avoided questions about new elections but promised to change the voting system. Voters will no longer choose parties but individual candidates from different regions of the country, he said.

Before the crowd released him and other prisoners from jail, the newly elected PM was serving a 11.5 years sentence for the 2013 kidnapping of a regional governor during protests against a Canadian-owned gold mine. Zhaparov was at the time a lawmaker whose reputation was based on populist speeches against the mining company.

The day after his supporters released him, the Supreme Court annulled his charges and ordered the case to be reviewed. As he was being elected PM, several other opposition leaders who were freed with Zhaparov were arrested or re-arrested, including former President Almazbek Atambayev and members of his inner circle.

After the crowd took over government buildings, a group of smaller opposition parties tried to find legal ways to form a government in the name of the revolution.

At the same time, dozens of MPs loyal to the previous government quietly met in a hotel and nominated Zhaparov as a candidate for prime minister. They met again four days later and elected him in Saturday's disputed vote. One MP claimed others voted on her behalf after she left the meeting even though she stated she was abstaining.

A number of lawmakers say they were threatened by a criminal group that’s backing Zhaparov’s appointment and a few of them named Kamchybek Kolbayev, a U.S.-designated drug kingpin, as the person behind the threats. Zhaparov denied having anything to do with Kolbayev.

“I am against Zhaparov. He is controlled by Kolbayev. It is 100%,” one of the MPs posted on social media.

“MPs are demoralized because they are intimidated and forced to sign a consent to Sadyr Zhaparov. They are under pressure and threatened by criminals,” opposition lawmaker Elvira Surabaldiyeva told Kloop.

“Criminals are moving to seize power and, naturally, they are using their own ways including threats and blackmail,” another MP, Sadyk Sher-Niyaz, said.

One of the lawmakers, vice-speaker Aida Kasymalieva, wrote on Facebook that she was threatened by an MP and candidate from the Mekenim Kyrgyzstan party which is backed by the family of Raimbek Matraimov, a controversial former top customs official whose party was accused of vote buying and intimidation which triggered the protests. Matraimov was featured in an investigation by OCCRP, RFE/RL’s radio Azattyk, Kloop and Bellingcat.

Several media outlets sad in a joint statement that they have been threatened by Zhaparov’s supporters.

Erkin Alymbekov, managing editor of Sputnik Kyrgyzstan, identified one man who attended a pro-Zhaparov rally and then came by the outlet’s office and threatened employees. Other media, like Current Time and Kaktus, also claimed they have been threatened.

"Yesterday at the rally our correspondent was threatened during the live broadcast," a representative of RFE/RL’s Azattyk and Current Time told Kloop.

Kaktus reported that Zhaparov is being supported by online trolls who worked for the Matraimovs.

Zhaparov later dismissed claims that his supporters were involved in any wrongdoings and accused the media of being biased.