German authorities raided on Tuesday the business and the residence of an individual suspected of money laundering as part of an investigation involving the “Troika Laundromat,” a multi-billion dollar scheme uncovered by OCCRP last year. 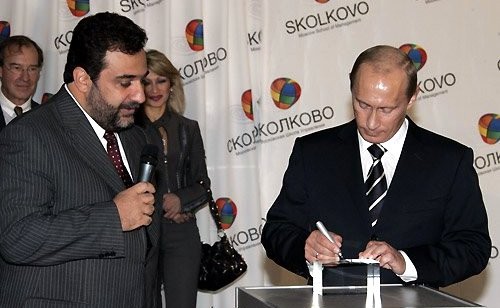 Troika Dialog's former president Ruben Vardanyan, with Russian President Vladimir Putin, at a 2006 event. (Photo: Kremlin.ru).  Directed by prosecutors from Frankfurt/Main, the Federal Criminal Police Office searched the premises of an import and export company and the residence of an unnamed, 57-year-old suspect.

The prosecutors said the man is accused of having brought money made from criminal activities abroad and injecting it into Germany’s economy, concealing its actual origin. Transfers were made through bank accounts belonging to the company on behalf of private individuals living in Russia, the statement said.

Prosecutors suspect that transfers worth some US$8.2 million were made from offshore companies.

The Troika Laundromat takes its name from Troika Dialog, Russia’s former largest private investment bank which found itself at the center of a complex money laundering network made of offshore companies with accounts in Baltic banks.

OCCRP discovered the scheme thanks to a huge leak composed of 1.3 million banking transactions and other documents from 238,000 companies it obtained along with Lithuanian news site 15min.lt.

Through the Troika Laundromat, which functioned from 2006 to early 2013, members of Russia’s elite funneled $8,8 billion out of the country to evade taxes and buy luxurious residences, yachts, etc.

OCCRP calculated that of that amount, one billion was laundered in Germany.

The Frankfurt prosecutors also announced a separate series of raids conducted against six individuals suspected of setting up offshore companies with the help of a bank in Puerto Rico. The aim was to hide investment income from German tax authorities. Banks where the suspects were thought to have accounts were also raided.