Authorities in Mexico have detained the leader of one of the country’s powerful criminal syndicates after he made threats against the government following the arrest of several of his family members last month. 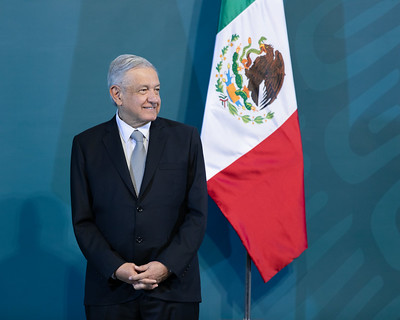 President Andre Manuel Lopez Obrador has come under fire for his 'soft' stance against the cartels (Photo: flickr, Creative Commons Licence)The Ministry of National Defence announced on Sunday that state and federal officers had detained Jose Antonio ‘El Marro’ (‘The Sledgehammer’) Yepez, leader of the Santa Rosa de Lima cartel, in the central state of Guanajuato.

The cartel leader’s arrest was accompanied by that of his alleged head of security and four other high-ranking members of the group, along with the seizure of 36,400 pesos (US$1,600) and several weapons, including a grenade launcher.

Mexico’s Attorney General, Alfonso Durazo, added in a tweet that a kidnapped person had also been rescued as the result of the operation.

In a video posted to his Twitter account, President Andres Manuel Lopez Obrador praised the operation, citing its success as an important further step in fighting “the plague of corruption and impunity that has caused so much damage to the people of Mexico.”

El Marro’s arrest follows after the capture of his mother, sister and girlfriend, along with 26 other cartel members, earlier in June as part of a coordinated sting against the gang.

The action itself was in response to a spate of violence carried out by the group across the state capital of Celaya, during which members allegedly torched several shops and cars.

Upon learning of the arrest of his family members, El Marro took to social media to threaten swift retaliation against the authorities. “I’m going to blow up, you will see,” he said. “In the name of my mother and my people, I do not fear you.”

All 29 detainees were subsequently released after it transpired that the authorities had only obtained a warrant to conduct a search of a stolen vehicle, not the property at which the suspects were apprehended, according to Mexico News Daily.

The outlet later reported that State Attorney General for Guanajuato, Carlos Zamarripa, is facing investigation over his mishandling of the operation.

Federal Attorney General for the state, Alejandro Gertz Manero, reportedly decried Zamarripa’s actions as ‘farcical,’ as well as admonishing state authorities for attempting to pass the buck when they realised their mistake.

“Guanajuato has been a veritable hellhole of violence for five years and this attorney general has been there for 11 years. We’re going to initiate proceedings… to shed light on all his actions to see if there are any grounds for legal complaint,” he reportedly said.

With an average of 10 homicides a day, Guanajuato has in recent years become a battleground in an ongoing turf-war between the Santa Rosa de Lima cartel and the Cartel Jalisco Nueva Generacion (CJNG) over access to the region’s pipelines.

The Santa Rosa syndicate is unique among Mexico’s criminal organisations, in that its primary income comes not from drug smuggling but from the theft of fuel to be resold on the black market - a sector within which the CJNG has been looking to increase its operations.

El Marro even suggested in his recent social media post that his organisation would partner with the Sinaloa cartel, Mexico’s largest, most profitable criminal gang and fierce rivals of the CJNG, to combat the group’s encroachment onto his territory.

The arrest of the Santa Rosa leader signals an important win for the country’s president. As the country’s homicide rate continues to soar - with 2,600 deaths in March alone, the highest monthly death-toll on record - Lopez Obrador has come under fire for his perceived softer stance against the cartels, modelled on his policy of “abrazos, no balazos” (‘hugs, not bullets’).

In stark contrast to the approach of his predecessor, Felipe Calderon, who in 2006 declared an all-out war against such criminal groups, the current president has instead sought to address the socio-economic causes of crime and the culture of corruption among public officials that allows the country’s mobsters to act with impunity.

Critics seriously questioned the ongoing viability of Lopez Obrador’s non-combative stance after a video surfaced online last month, in which members of the CJNG were seen standing beside military vehicles, sporting the group’s insignia and showcasing heavy-duty automatic weapons while chanting the name of their leader, Nemesio Oseguera ‘El Mencho’ Cervantes, in a show of firepower and defiance against the present government.

The release of the footage by the cartel also comes amid a rapidly escalating war between their rivals, the Sinaloa cartel, and the nascent Carboca cartel under the command of veteran drug kingpin and former Sinaloa associate, Raphael Caro Quintero.

Last month, OCCRP reported that hitmen in the state of Sonora had gunned down a member of the Sinaloa cartel in retaliation for the execution of Caro Quintero’s nephew just two days before.

Despite this, the government’s new approach has nonetheless secured a handful of significant victories. In the months since March, the Mexican Finance Ministry’s Financial Intelligence Unit has conducted two successful stings against assets held by the Sinaloa cartel and the CJNG.

Meanwhile, the country’s military was recently redeployed to oversee customs checks at borders and seaports, with the aim of cutting off smuggling routes and starving the cartels of important precursor chemicals for the manufacture of narcotics.