A Canadian forensic team identified last week the body of a businessman who is believed to have been the third victim this month of attacks against members of a crime family that were inspired by revenge for an old murder. 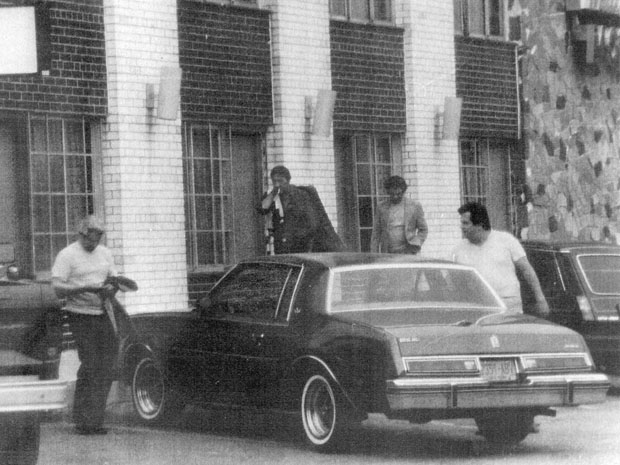 Vito Rizzuto (dark suit) in New York in 1981. Rizzuto was indicted by the U.S. in 2004 for the murders of three capos of the Bonanno crime family in 1981, allegedly ordered by a rival Bonanno boss, Joseph Massino (last on the right). (Photo: U.S. Department of Justice). The remains of Grant Edward Norton were found in a wooded area of London, a city in southwestern Ontario, in such condition that police couldn’t “confirm whether they were human without a forensic autopsy”.

According to the Toronto Star, Norton was facing fraud charges and was on the run. He was murdered around the time his business associate Pasquale “Pat” Musitano, the boss of the Musitano clan, was killed in a third attempt on his life.

Musitano, 52, and one of his associates were shot in plain daylight on July 10 outside of a mall in the town of Burlington. The second victim, which local media claimed is Musitano’s sidekick John Clary, remains in hospital in serious condition.

The killer escaped in a grey sedan and is still being searched for by the police.

CBC reported that a few days later a second associate who witnessed Musitano’s murder, Guisseppe Avignone, saw his car set ablaze and the word “Rat” painted on his garage door.

Pasquale led the notorious Musitano family, one of Canada's oldest crime families, whose roots in the area of Toronto can be traced back to 1937 when his great-uncle fled the Italian region of Calabria, home of the ‘Ndrangheta mafia, to immigrate to Canada, according to the National Post.

With his younger brother Angelo, murdered in 2017, Pat Musitano pursued the criminal legacy of his family and worked to make his way up in the underworld of the city of Hamilton, near Toronto.

A mafioso whose image was fitting into the stereotype Hollywood movies have created, Pat Musitano hid his eyes behind black sunglasses and moved around surrounded by bodyguards. His death, some say, marked the end of the Musitanos dynasty.

Experts say the latest attacks against the Musitanos, including Pat’s murder, came as revenge  for the murder of another Hamilton mobster, John “Pops” Papalia, 23 years ago.

According to Antonio Nicaso, lecturer at Queen’s University and author of several books on the Canadian mafia, the Musitano family used to be at the center of an historic power struggle between different clans.

Despite their Calabrian origins, the Musitanos were historically allied with the Sicilian Cosa Nostra, acting as the reference in the Toronto region for the Bonannos, New York’s top mafia family. That placed them at odds with the Calabrian families operating in Canada, Nicaso told OCCRP.

Their betrayal of their ‘Ndrangheta heritage culminated with the murder of Papalia in 1997, a serious competitor to Montreal-based godfather Vito Rizzuto who had pledged to gain sovereignty towards his American counterparts and was actively working on expanding his empire to the west.

The Musitanos took the strategic decision to side with the fast rising Montrealese, explained Nicaso.

According to CBC, Pat and Angelo Musitano were charged for the contract killing of Papalia and his lieutenant Carmen Barillaro. The charges concerning Papalia’s murder were dropped after they struck a deal to plead guilty to conspiracy to kill Barillaro.

They spent 10 years in jail and when they were released in 2007, they still enjoyed the protection of Rizzuto.

“When he died [in 2013, from pneumonia], that’s when the Musitanos started to be on the defensive side,” Nicaso explained. “In the mafia, revenge doesn’t have a statute of limitation.”

Angelo, who had quit the criminal world, was murdered in 2017. In 2019, Pat miraculously survived multiple gunshots.

“Since then, Pat was protected full time by bodyguards. The killer likely took the first opportunity he had of him outside his house and his armored car,” Nicaso said, adding that Pat’s murder on July 10 can be seen as one of the last chapters of the internal war that erupted after Rizzuto’s death.

Rizzuto had focused on business and had created strategic alliances with other criminal organizations in the country and this is the legacy two rival factions within the mafia decided to pursue.

“The mafia takes care of the importation of drugs while the Hells Angels [an influential biker gang] does the distribution and the street gangs sell. All take their part of the profit while trying to minimize violence in order to avoid attracting police attention,” Nicaso explained.

“The goal of the next generation will be to build more alliances, in particular with the Sinaloa cartel and with money-launderers interested in Canada’s investment safety,” he concluded.