Mexico: Experts Identify Remains of One of the 43 Missing Students

Experts have identified the remains of one of the 43 Mexican students who went missing in the town of Iguala six years ago. The group was allegedly believed to have been abducted by police, handed over to a local crime gang and executed. 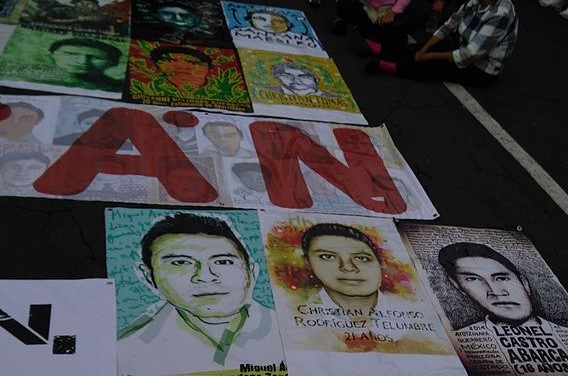 Christian Alfonso Rodriguez del Telumbre, bottom middle, was 21 at the time of his murder. (Photo: PetrohsW, CC BY-SA 4.0)The remains of Christian Alfonso Rodriguez del Telumbre have been found a few months ago in a place locally known as the “Butcher’s Ravine,” approximately 20 kilometers from the town of Iguala. The Attorney General’s Office announced on Tuesday that DNA tests have confirmed his identity.

The teaching trainees of the Normal Rural School of Ayotzinapa were abducted on September 26, 2014, while on their way to join a protest in Mexico City.

According to the first investigation, the then-mayor of Iguala instructed police to stop the students’ busses and hand the passengers over to members of a cartel which killed them and burned their bodies, newspaper El Universal reported.

The crime sparked protests against corruption and violence across the country and forced the governor of the state of Guerrero to resign. Authorities found the burned remains of 19-year-old student Alexander Mora in December that year in a landfill about a kilometer away from where Christian Alfonso’s bone fragments were found five years later.

The DNA tests were conducted by experts from the University of Innsbruck, Austria, and the Forensic Anthropology of Argentina, which have now confirmed the results.

The same day the findings were announced, judicial authorities suspended a court secretary involved in the release of “El Mochomo,” the leader of the Guerreros Unidos, the cartel that allegedly massacred the students. He will be probed for possible bribery and influence peddling.

Authorities conducted a total of 142 arrests, but 74 suspects were released and no one has been convicted.