Ukraine’s anti-graft officials said on Saturday that they have detained three people who offered them a record US$5 million bribe to drop a criminal case against Mykola Zlochevsky, a former minister and owner of a natural gas company suspected of having used his ministerial post to enrich himself. 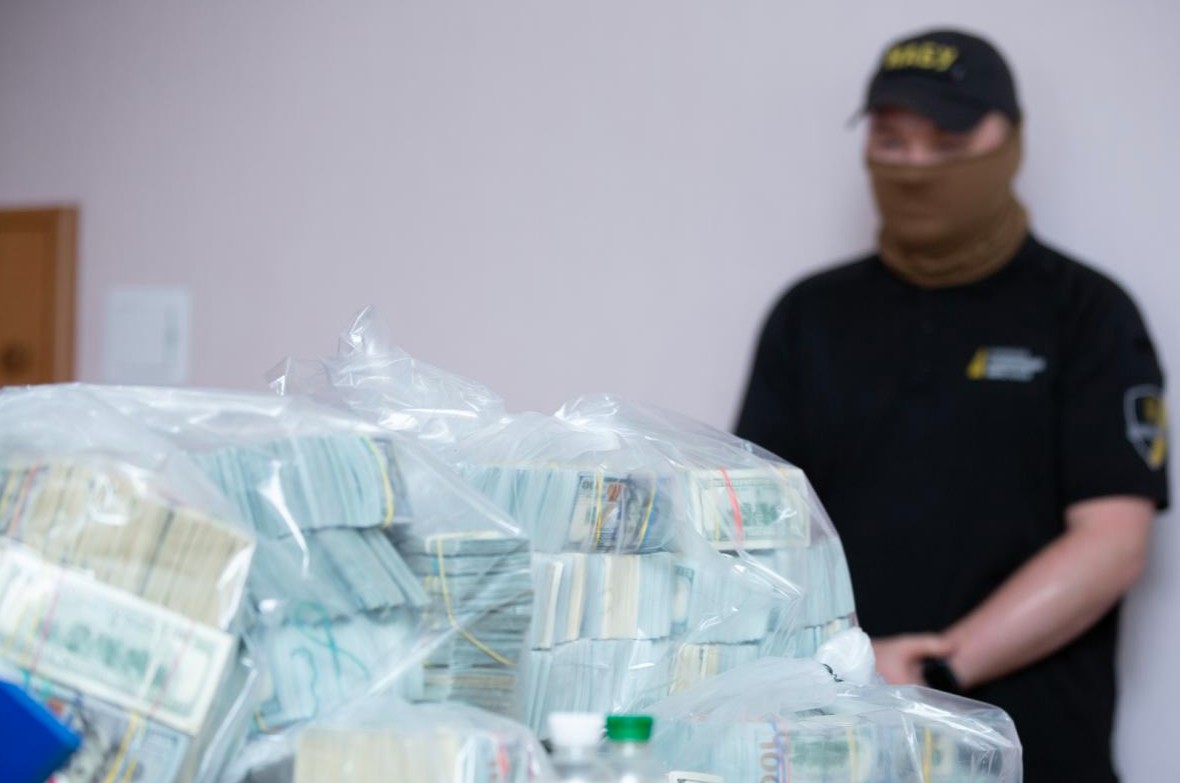 Ukraine's anti-graft authorities seized US$6 million, offered to them to drop a criminal case against Mykola Zlochevsky. (Photo: National Anti-Corruption Bureau of Ukraine)Without naming them, the head of Ukraine’s National Anti-Corruption Bureau (NABU), Artem Sytnyk, confirmed the detention of Deputy Chief of the State Traffic Police, one of the leaders of a group of companies affiliated with Zlochevsky, as well as one of the alleged Zlochevsky proxies, an official of the State Fiscal Service.

Authorities seized the $5 million, plus another million that was in the car of the detained deputy chief of the Ukraine’s State Fiscal Service.

Representatives of NABU and the Specialized Anti-Corruption Prosecutor’s Office (SAPO) on Saturday showed reporters in Kyiv bundles of new dollar bills, held together with yellow, green and pink rubber bands and packed into transparent plastic bags.

“A bribe of $6 million was intended to close the episode when the ex-minister of ecology (Zlochevsky) assisted in embezzling the stabilization loan from the National Bank issued to Real Bank,” Sytnyk told a press briefing in Kyiv.

The suspects, as he said, first offered $1 million to “just transfer the case to other investigating authorities.”

“After refusing to receive these funds and continuing negotiations, they offered $5 million to close the criminal proceeding, insisting for that to happen before June 14,” Sytnyk said.

Zlochevsky, the former Ecology and Natural Resources Minister and owner of the natural gas company Burisma, allegedly lives in Monaco where he fled in 2019. On June 14, 2020, he celebrated his 54th birthday and if the bribe would have worked, charges against him would have been dropped and his return to Ukraine would have been his birthday present.

The head of SAPO, Nazar Kholodnytsky, explained that $5 million were intended for “a person who should have made the procedural decision to close the case,” while $1 million was supposed to pay “consulting services of a middleman.”

Burisma Group immediately denied any of this was done on their behalf, stressing that “it was wrongfully asserted that certain illegal actions had been allegedly perpetrated in the interests of Burisma Group and its owner.”

“Neither the Group’s owner Mykola Zlochevsky nor its employees have any relation to the announced events or said funds,” the group said in a statement.

Stressing that Zlochevsky “has never addressed anyone with requests to commit illegal actions and has in no way contributed to such actions,” Burisma strongly condemned any effort to “drag the Group or its owner into an orchestrated scandal clearly benefiting certain actors.”

Burisma found itself in the focus of the world’s attention last year after US President Donald Trump allegedly insisted that Ukraine launches a corruption probe into Hunter Biden, the son of Trump’s political rival Joe Biden, who since 2014 held a seat at Burisma’s board of directors.