US authorities charged last week a former Venezuelan lawmaker who worked together with President Nicholas Maduro with narco-terrorism and drug trafficking, claiming that he was plotting to attack the United States. 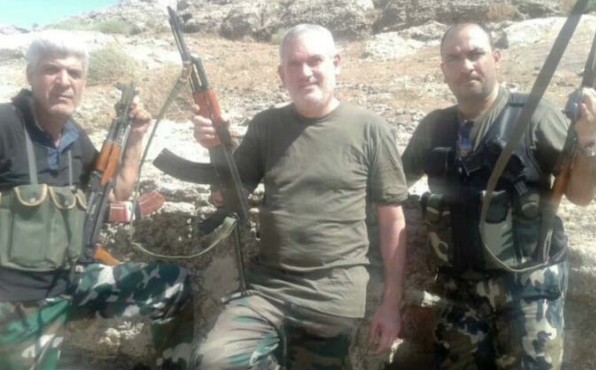 Adel El Zabayar and two other men in Syria. (Photo: Court Southern District of NY)Prosecutors said that native Syrian Adel El Zabayar, 56, traveled to the Middle East in 2014 to obtain weapons and recruit members of Hezbollah and Hamas to train at clandestine training camps in Venezuela, with the purpose of creating “a large terrorist cell capable of attacking the United States interests.”

According to US authorities, El Zabayar is a member of the “Cartel of the Suns,” a Venezuelan state-sponsored drug-trafficking cartel, composed of high-ranking Venezuelan officials.

“IN VENEZUELA, the only suns that exist are the suns of dignity and patriotism, which will defeat infamy and any threat against our independence. For a US official to talk about our generals, he must wash his mouth well WITH CHLORINE. Did you hear #Trump ?,” El Zabayar tweeted.

The charges against him came two months after the Department of Justice unsealed an indictment against Maduro and 14 other current or former Venezuelan officials. The cartel is suspected of having corrupted the legitimate institutions in the country to facilitate the export of tons of cocaine into the United States.

The DoJ refered to Maduro as 'former president' because the US considers Juan Guaidó the country's leader ever since a crisis erupted in January 2019 over who is the legitimate president of Venezuela --  Maduro or Guaidó.

According to the US authorities, El Zabayar participated in weapons-for-cocaine negotiations with the Fuerzas Armadas Revolucionarias de Colombia (FARC) -- a designated foreign terrorist organization -- and obtained anti-tank rocket launchers from the Middle East for the FARC as partial payment for cocaine.

“The accusations by the US Department of Justice against me are another insult coming from the American government against those who do not kneel down before White House dictum, as it has happened against other brothers and patriots in my country,” El Zabayar said in another tweet.

The Venezuelan government also pronounced against the US statement through the Minister of Popular Power for Foreign Relations, Jorge Arreaza.

“On behalf of the President @NicolasMaduro and the Government of the Bolivarian Republic of Venezuela, we express our full support and solidarity with the worthy comrade @Zabayar, before the infamous and fanciful accusations of the US Department of Imperial Injustice,” he tweeted.

This story has been updated to clarify that the United States has recognized Juan Guaido as the legitimate president of Venezuela and refers to Maduro as the former president.