A South African watchdog criticized the country’s ministry in charge of water for its response to widely reported corruption in the sector, arguing tat the institution focused on judicial proceedings rather than on governance changes. 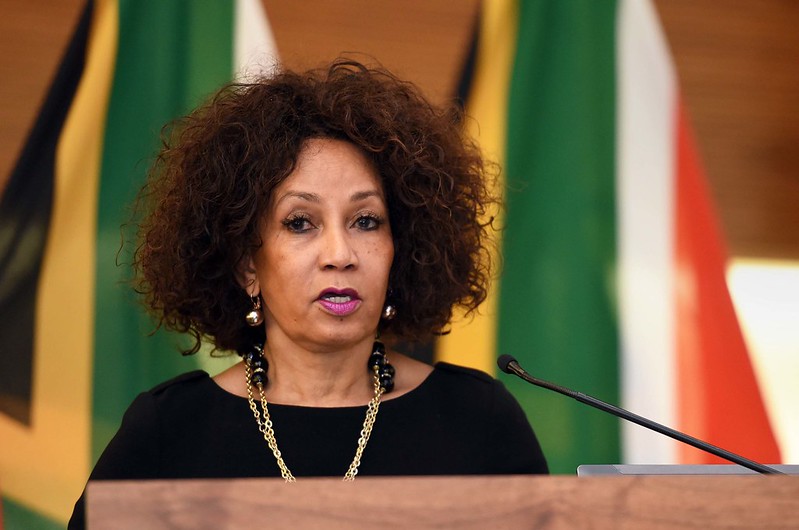 Lindiwe Sisulu, Minister of Water and Sanitation, in 2018. (Photo: Government of South Africa, CC BY-ND 2.0)The COVID-19 pandemic has brought a new sense of emergency to the issue of water supplies in South Africa and elsewhere, as lack of water in a community prevents access to basic hygiene, helping the virus spread.

In the past years, bad decisions driven by corruption have weakened the reliability of South Africa’s water system, leading to repeated water shortages in many communities.

The day before, she had appointed a team of lawyers to review all fraud, corruption and irregular expenditure reports in the DWS.

“Advances were made to tackle fraud and corruption within the Department as a result of various forensic investigations”, she said.

The DWS disclosed that between April 2012 and September 2019, a total of 249 reported cases were investigated and that 11 senior managers and 86 lower level staff have been charged and found guilty, while more than a hundred cases are still under investigation.

“The potential recoveries are estimated at R18.2 million (US$1 million)”, Sisulu added.

“This is not enough,” Corruption Watch said in a statement on Monday.

OCCRP reported in March that the NGO issued a report examining the impacts of corruption in the Department of Water and Sanitation on water supplies.

Corruption Watch noted that the million the ministry expects to recover is a tiny fraction of the department’s 950 million classified by the state auditor as “irregular expenditure.”

With very little senior officials removed from functions, the advocacy group stressed that in order to address water corruption, structural and cultural changes were needed.

“The first step is to recruit and support ethical and competent people to lead the sector; then to ensure that procurement processes are kept honest and that political influence is kept out; and finally, a culture of consequences must be instilled”, Corruption Watch said.

The NGO’s report outlined how some companies conspired with DWS or local government officials to proclaim an emergency in order to bypass procurement rules or raise the prices.

By 2018, the Department of Water and Sanitation was reputed “insolvent” by members of a parliamentary monitoring group.