After having paid massive fines and having returned thousands of questionably acquired antiquities, Hobby Lobby, a US based arts and crafts chain which heavily funded the Museum of the Bible in Washington DC, is now suing Christie’s for the US$1.6 million they had paid for a 3,500 years-old cuneiform tablet from Iraq that turned out to have been stolen. 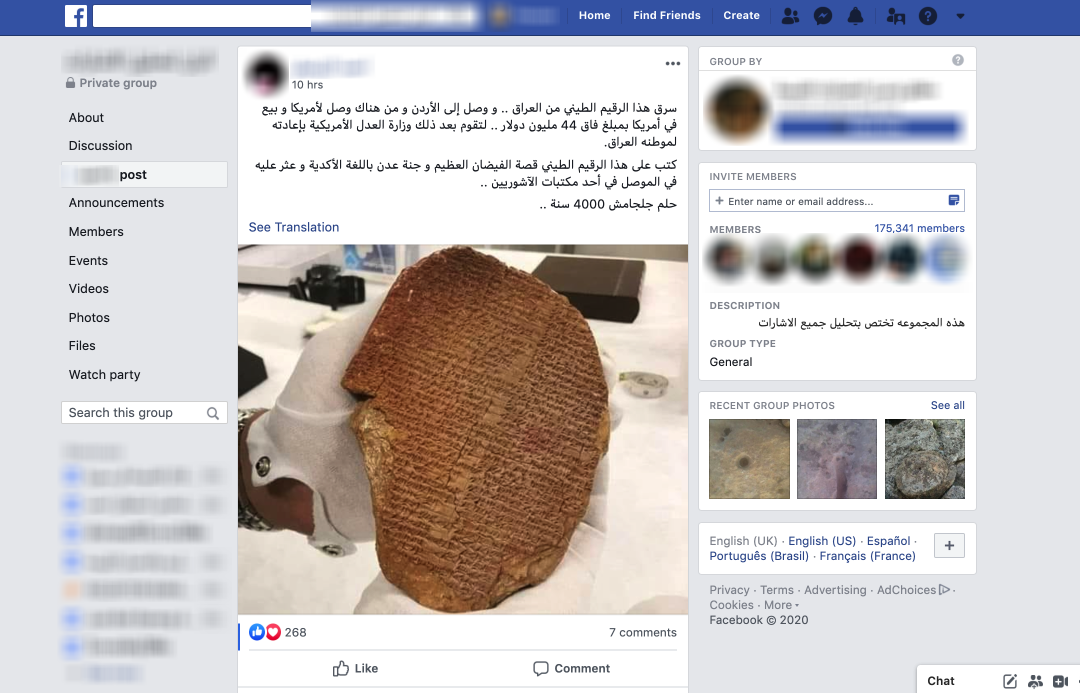 Facebook groups which facilitate the illegal antiquities trade have used the publicity of the Gilgamesh Dream Tablet to further encourage looting. (Source: ATHAR Project) Federal prosecutors are seeking the repatriation of the Gilgamesh Dream Tablet which displays the Sumerian epic in cuneiform script. The artifact was slated to be revealed at the Museum of the Bible, but prosecutors have found that the auction house which sold the tablet to Hobby Lobby, had withheld information regarding the artifact’s provenance.

Hobby Lobby is claiming Christie’s didn’t do their due diligence and wants its money back.

“This lawsuit seeks a recovery for Hobby Lobby based upon promises Christie’s made when it sold the Gilgamesh Tablet to Hobby Lobby in 2014,” said the chain’s lawyer Michael Mcullough in a statement.

According to the Department of Justice, the tablet went through a chain of auction houses, beginning with its purchase from a Jordanian antiquities dealer named Ghassan Rihani who died in 2001. He sold it in London for $50,000.

It was then sold from house to house and its value rose, partially thanks to a variety of false provenance letters that were crafted for the tablet. One mentioned that it was found in a box of miscellaneous bronze artifacts in 1981. Ultimately, it was purchased by Michael Sharpe Rare & Antiquated books, who in turn sold it to Christie’s who sold it to Hobby Lobby for $1.6 million.

Now the Department of Justice has taken possession of the artifact and is demanding its return to Iraq.

“Whenever looted cultural property is found in this country, the United States government will do all it can to preserve heritage by returning such artifacts where they belong,” stated United States Attorney Richard P. Donoghue in a statement released by the US Attorney’s Office for the Eastern District of New York.

“In this case, a major auction house failed to meet its obligations by minimizing its concerns that the provenance of an important Iraqi artifact was fabricated, and withheld from the buyer information that undermined the provenance’s reliability,” he added.

While the DoJ has stressed that Hobby Lobby is fully cooperating with the investigation, this isn’t the first time it’s been found with misbegotten artifacts.

Only a few months ago, Hobby Lobby CEO Steve Green announced he would be turning over some 11,000 artifacts from his personal collection to be repatriated to Egypt and Iraq due to unclear provenance and in 2017 he paid a $3 million fine for smuggling Iraqi artifacts into the US under false customs declarations.

According to Katie Paul, Co-Director of the ATHAR project which montiers the online illegal antiquities trade, the publicity of Hobby Lobby’s lawsuit has only encouraged the illegal market.

“The Hobby Lobby case of the Gilgamesh Dream Tablet is yet another example of how the opacity of the antiquities market can contribute to the laundering of illicit artifacts,” Paul said.

“The sale of stolen material for high prices to western buyers can fuel looters to continue looking for potentially valuable material to traffic,” he warned.

Word of the Hobby Lobby case has already reached Facebook antiquities trafficking groups monitored by ATHAR Project. Users in these groups posted a photo of the tablet and inflated the purchase price to further the narrative of “treasure hunting," noting that an American bought the tablet for $44 million.”