Colombian prosecutors said on Tuesday that former General Mauricio Santoyo was put in jail while they investigate him for money laundering and illicit financial and criminal activity that connect him to a notorious far-right paramilitary and narco-trafficking group. 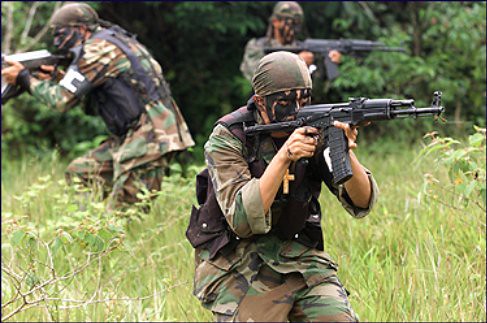 An infamous narco-trafficking and paramilitary organization, The United Self-Defense Forces of Colombia, AUC, bribed former General Mauricio Santoyo for political favors, prosecutors say. (Credit: NoDerivs CC BY-ND 2.0)Santoyo, who served as the Head of Security for ex-President Álvaro Uribe, had been extradited to the US and was incarcerated for eight years after he was found to have been connected to the United Self-Defense Forces of Colombia, AUC, which it designated as a terrorist organization. He now faces additional charges as new allegations emerge after being repatriated last year.

Martha Soto, the director of the Investigative Unit of El Tiempo, a prominent Colombian newspaper that broke the story of Santoyo’s U.S. indictment in 2012, explained to OCCRP that the US case – where he was found to have received bribes in exchange for helping traffic large shipments of drugs into the U.S. – ultimately led Colombian authorities to investigate it themselves years later.

Prosecutors now allege that Santoyo was paid roughly US$833,000 by “La Oficina (The Office)” – originally founded as an enforcement and collection entity of Pablo Escobar’s Medellin cartel – and members of the AUC to release members of its organization and provide intel on the operations of Colombian security forces.

“[According to allegations] Santoyo delivered classified and intelligence information to the high command of the AUC and to the 'office' about the investigations on cartels and activities of various mafia groups carried out by Colombian authorities that were working with the United States and England,” Soto told OCCRP.

Upon returning to Colombia last year, Santoyo was also investigated for being involved in the disappearance of members of Asfaddes, a civil advocacy group that represents the families of people who have been detained or gone missing, and for allegedly aiding in the cover-up of a murder of a journalist.

This is not the first member of the Uribe administration who was found to have been connected to the AUC – a number of aides, including his cousin, were found guilty of having ties to the paramilitary group.

Uribe, who served as president from 2002 to 2010, and was awarded the Presidential Medal of Freedom by U.S. President George W. Bush in 2009 – the highest civilian award – for his effort in defending democracy and human rights, has warded off investigations into the possibility that he may have been connected to the AUC as well.

The ex-President is currently under investigation for his alleged link to several massacres committed by paramilitaries while serving as a governor of Antioquia, and is also being probed for allegedly bribing and threatening ex-paramilitaries into making false accusations about a political opponent.

His brother, who has been under arrest since 2016, is also being investigated for his links to a paramilitary group.

In response to a criminal probe that was opened by Colombia's attorney general’s office in 2013 that investigated the former president’s alleged links to the AUC, he said that these accusations were baseless, and were likely "criminal vengeance" by imprisoned drug-dealing paramilitaries.

Soto told OCCRP that the Santoyo case does not necessarily incriminate the entire Uribe administration, but that this recent development may serve as just the tip of the iceberg in regard to the criminal investigations that might indict high-ranking officials for their links to the AUC.

“Several extradited paramilitary chiefs, such as Salvatore Mancuso, have handed over to the United States justice system, lists, still unpublished in Colombia, about links with officials from both the Army and the Police who will have to be investigated,” Soto said.