A general with Russia’s intelligence service could be the highest-ranking official identified as having been involved in the downing of Malaysian Airlines Flight MH17 in 2014 that killed 298 people, the investigative outlet Bellingcat revealed in its latest investigation published on Tuesday in cooperation with Russia’s The Insider. 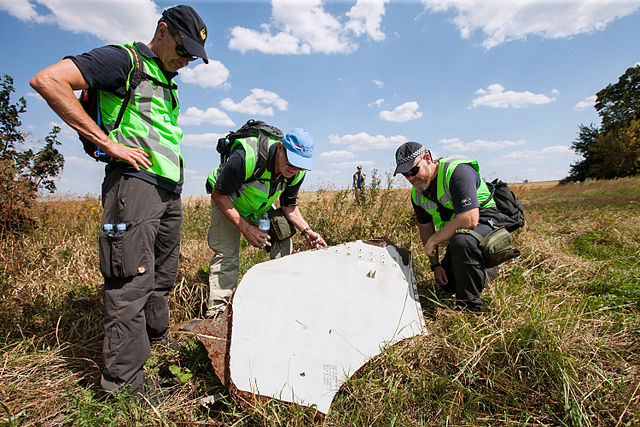 Investigation of the crash site of MH-17 by Dutch and Australian police officers. (Photo: Dutch Defense Ministry)Colonel General Andrey Ivanovich Burlaka of the Russian Federal Security Service (FSB), according to the report, could have been the one who supervised the movement of weapons from Russia to Ukraine, including the Buk missile launcher that shot the plane after crossing the border from Russia.

Bellingcat and The Insider found that Burlaka could be the person behind the name “Vladimir Ivanovich,” whose phone conversations with Ukrainian separatist commanders were intercepted and are part of the investigation into the plane’s downing.

All 283 passengers and 15 crew members were killed when Malaysia Airlines Flight 17 - MH17, heading from Amsterdam to Kuala Lumpur, was shot down while flying over eastern Ukraine on July 17, 2014.

“In November 2019, the Dutch-led Joint Investigation Team (JIT) announced the broadening of its criminal investigation into the shoot-down of MH17 to encompass the role of individuals within Russia’s military and administrative hierarchy who enabled the tragedy,” the Bellingcat report said.

The JIT made public 23 telephone intercepts from the days before the shootdown that could “prove the close involvement of Russian officials with fostering and funding the war in Eastern Ukraine, as well as directly coordinating with and providing substantial military support to ostensibly ‘independent’ militants.”

The Russian Federation exerted administrative, financial, and military control over the so-called Donetsk People’s Republic (DNR), according to the report.

Some Russian officials, whose voices could be heard in the intercepted calls, were easy to identify, the report read, but some remained unknown, including the person participants in the phone conversations referred to as ‘Vladimir Ivanovich’.

“‘Vladimir Ivanovich’ would have played a critical role in the chain of command for the deployment of the Buk installation in Ukraine, and thus also for the crime of shooting down MH17,” read the report.

Bellingcat stressed that Burlaka has been only two positions away from the FSB chief Alexander Bortnikov, “who answers directly to President Vladimir Putin.”

Russia has been denying any involvement in the MH17 tragedy.