An Ecuadorian court has sentenced the country’s former president in absentia to eight years in prison for taking bribes from a Brazilian conglomerate. 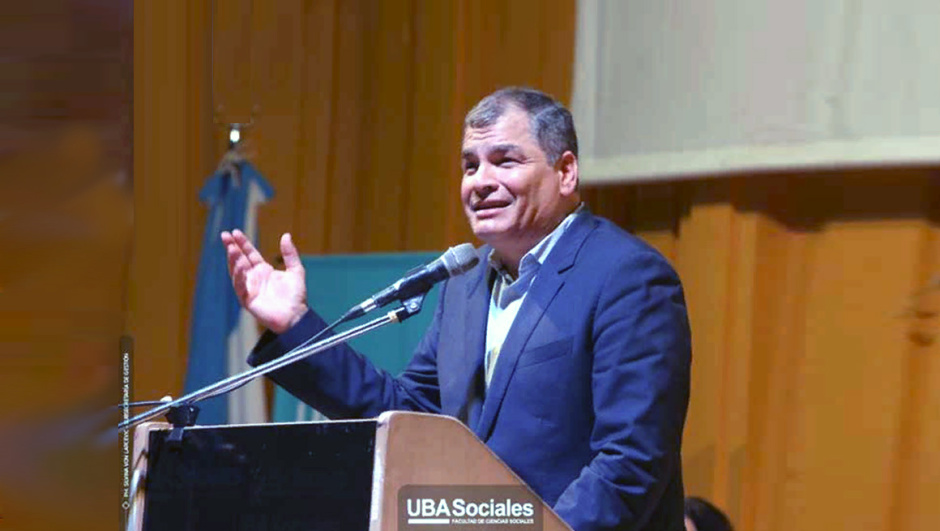 Rafael Correa giving a conference last december. (Photo: economiaenbicicleta.com)The Attorney General’s office announced in a statement on Tuesday that Rafael Correa, along with 19 others, has been convicted for accepting illicit payments.

Le Monde said that the sentence relates to bribes Correa received from companies including construction and petrochemicals giant Odebrecht in return for construction projects.

Correa has lived in Belgium with his wife since quitting politics in 2017.

Among the former president’s co-defendants was also the country’s former vice-president, Jorge Glas, whom OCCRP reported was previously sentenced to six years in a separate but related case.

The judgement was reportedly passed via live broadcast due to anti-COVID19 measures in the country.

The ruling stated that “the evidence submitted during the trial were sufficient to prove the existence of a structure of irregular money collection led by Rafael Correa” and his vice-president, who allegedly “facilitated the delivery and reception of bribes from several businessmen” in exchange for securing public contracts.

That ‘structure’ is estimated to have earned the defendants around US$7.5 million between 2012 and 2016.

In addition to the eight-year sentence, Correa and his co-defendants will be ineligible for 25 years and their real-estate assets in Ecuador will be seized. They will also be required to issue a public apology.

Experts say it is unlikely that Rafael Correa, a leftist economist who ruled Ecuador from 2007 to 2017, will serve the entirety of his sentence even if he is extradited.

“I'm not sure if Correa’s sentence would be as large if he would be in Ecuador right now,”  political scientist John Polga-Hecimovich told OCCRP. He added that the sentence is instead intended to “prohibit Correa from returning to the country and running for office again”.

Correa claims the sentence is nothing more than a gesture of political persecution. “This is what they were looking for: handling justice to achieve what they never could in polls”, he said on Twitter shortly after the sentence was passed.

The former president has proactively attacked the credibility of the trial since it began, accusing judges of accepting bribes in exchange for their verdict.

“All this is false. Ask for the contracts, [the bribe] does not exist. Nothing has been proven. The judges were pre-paid,” he tweeted.

However, Polga-Hecimovich suspects that the reality of the trial may be more complex. “It’s plausible that both Correa committed the violations that he is accused of and that the trial could have been politicized and be seen as an attack by a government that is openly opposed to the former president,” he said.

Ecuador’s former president was not always on bad terms with its current ruler, Lenín Moreno, who was Correa’s vice-president during his first term. In fact, Correa even designated Moreno as his successor during the 2017 presidential campaign.