US President Donald Trump signed a $US 2.2 trillion coronavirus relief bill last week, but not without also issuing a “Signing Statement”, an official proclamation, asserting that he would not,  as the bill stipulates, let an independent inspector general oversee who his administration funds. 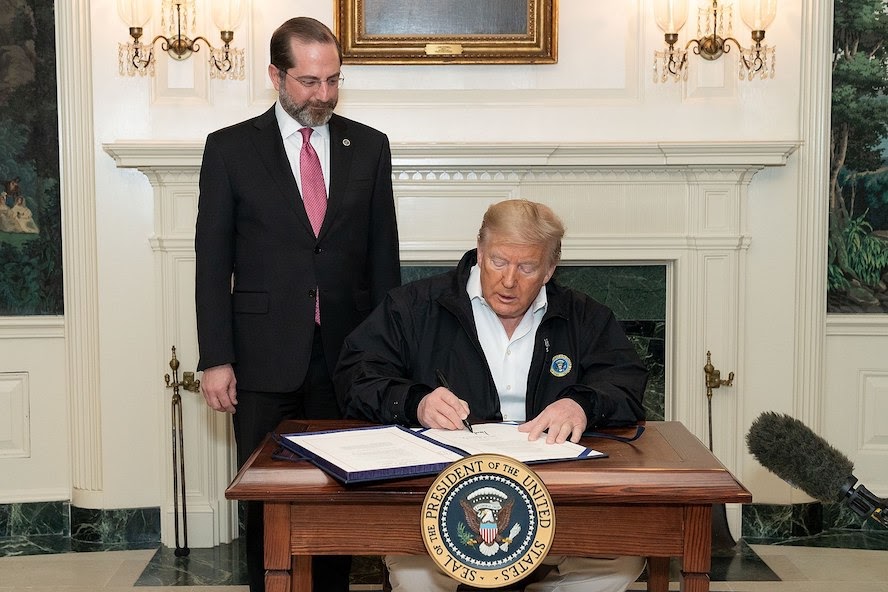 President Trump signs Coronavirus Response Bill (White House)About $500 billion in the huge bill was set aside for corporations, in what presidential critics have called a “slush fund” they worry could go to enrich the businessman-President, his family and friends, or to win him leverage in the November presidential election.

“Trump wants the $500 billion slush fund to be under his control – to award his family and friends, punish his enemies, and intimidate the private sector into supporting his reelection,” Robert Reich, a former Secretary of Labor who is now a professor of public policy at Berkeley, wrote on his Facebook account.

Alexandria Ocasio Cortez, a high-profile junior representative from New York, wrote on Twitter that the President’s signing statement jeopardizes the already weak oversight provisions of the bill. “This is a frightening amount of public money to have given a corrupt admin with zero accountability,” she wrote.

Liz Hempowicz, Policy Director at the Project On Government Oversight explained to OCCRP that while the signing statement does not hold any legal weight, it should serve as a sign that the President is prepared to limit the communication that the inspector general will have with Congress.

“Congress should be ready to respond if that happens,” she said.

Trump maintains that the special inspector, set up in the legislation specifically because critics had such worries, is unconstitutional. Only the president, he contends, may present reports to Congress about the implementation of laws. Trump has been in a long dispute with Congress over whether it had any right to watch over his behavior.

This comes amidst the discovery that Senior White House Advisor Jared Kushner, Trump’s son-in-law, is relying on what the Citizens for Responsibility and Ethics in Washington (CREW) calls a “shadow task force” – a backchannel that enables high ranking government officials to negotiate with representatives from private industries on coronavirus relief, without any way for the public to oversee these proceedings.

Scott Greytak, advocacy director of the Transparency International’s US office, told OCCRP  that “these recent developments are far from what is needed to instill public confidence in the institutions that will be distributing financial relief throughout the country.”

“There is still a long way to go,” he explained, saying that now was the time for Congress and other watchdog organizations to continue putting pressure on ensuring that the proper checks and balances are in place to make sure that the funds in the aid package would be going into the right hands.

In a recent letter to Senate Majority Leader Mitch McConnell, the group called for beneficial ownership transparency and country-by-country reporting that they argue is necessary for tracking companies to whom the US government contracts and disperses loans and financial relief.

It also called for legislation that would keep members of Congress from using inside information to profit off the coronavirus crisis in the stock market, an issue that is already being investigated by US authorities.

Since Trump’s “Signing Statement,” Glenn Fine, the acting inspector general for the U.S. Department of Defense was appointed on Monday to be the chair of the committee tasked with overseeing the implementation of the Coronavirus aid package.

He will rely on an $80 million budget that has been allocated by congress to “promote transparency and support oversight” of the $2.2 trillion that will be distributed to various sectors of the US economy in the upcoming months.

Hempowicz told OCCRP that she was happy to see how quickly Glenn Fine was appointed to lead the Pandemic Response Accountability Committee. “The Committee has the tools it needs to be successful, but will need strong and consistent leadership committed to doing meticulous oversight over this emergency spending,” she said.

According to reports coming out on Tuesday, Justin Muzinich, a former executive at the large investment bank Morgan Stanley, who is currently serving as Deputy Secretary of the Treasury is being considered by the White House to oversee the distribution of the $500 billion that will be allocated to the country’s corporate sector.

Muzinich, who is known as the architect of the 2017 Tax Cuts and Jobs Act, will likely be one of the central figures under scrutiny by U.S. Congress and the newly appointed Inspector General if he is nominated to hold the position.

“Perhaps more important than which inspector general leads the committee will be who the executive director and deputy director appointments are. They are the ones who will be managing the day to day work of the committee and its eventual investigative staff,” Hempowicz concluded.