Colombia, the world’s largest cocaine producer, closed its borders on Monday to stop an outbreak of the coronavirus but experts told OCCRP that this may fuel organised crime. 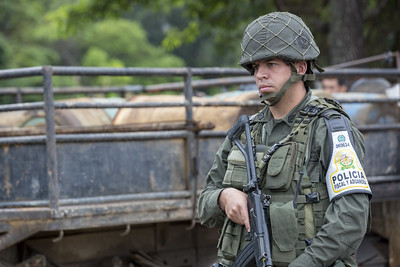 A Colombian Soldier guarding the border at Simon Bolivar International Bridge. (Photo: National Police of Colombia, Flickr)“A 2,000 kilometers long border is impossible to close,” the Director for Venezuela at the Washington Office on Latin America (WOLA), Geoff Ramsey, said, referring to the border between Venezuela and Colombia.

Since the beginning of the crisis in Venezuela, that border has been overwhelmed with those fleeing the Maduro regime and the economical collapse of their country. The epidemic could make the situation in Venezuela even worse.

“There are already hundreds of underground border crossing trails, called “trochas,” used to smuggle migrants, illegal gold, drugs and others,” Paul Angelo from the Council on Foreign Relations explained.

A report by the Pares Foundation estimates that not less than 28 criminals groups operate on the border.

Angelo fears that by closing its crossing points, Colombia will push fleeing Venezuelans toward the “trochas” and thus in the arms of criminal organizations.

In fact, that’s what happened when Venezuela closed its crossing points for four months last year, with little effect on the number of entries into Colombia.

“To cross, they'll have to engage in organised crime by paying bribes or getting involved in criminal activities,” he told OCCRP.

The Council on Foreign Relations fellow thus expects a “boom for organised crime”.

Both experts agree that the coronavirus crisis might give these groups some leeway, as security officials could shift their focus away from the narcotics fight.

However, if the pandemic measures last, drug traffickers could start to experience problems.

Ramsey believes that quarantine could have an impact on the cocaine market, as people won’t be partying as much with nightclubs closed and festivals cancelled. A decrease in demand could increase competition between the cartels.

But that’s only one side of the cocaine consumption, remids Paul Angelo: “a large part of the market is occupied by lesser quality, crack-mixed cocaine sold to poor people and consumed in the community”.

However, organised crime groups might feel the need to diversify its activities, which in those crisis times, might not require searching too far.

“Closed borders increase demand for all sorts of smuggled good: food, petroleum” says Paul Angelo. A list to which medicine could also be added.

With the system having already collapsed, Angelo is concerned the effects of the pandemic on Venezuela could be dramatic.

“The vulnerable population will become even more vulnerable, creating opportunities for organised crime” he says.