German police arrested six suspected members of a gang that made significant profits from trafficking people from Vietnam to Germany and making them work in nail parlors and sweatshops to pay off their debts. 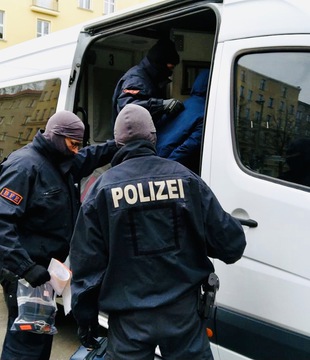 Police say they arrested six of the 13 suspects. (Photo: Bundespolizei)The federal police, Bundespolizei, said on Tuesday that 700 officers searched 32 objects across the country, mostly in Berlin, and gathered extensive evidence against the group which has brought 155 Vietnamese migrants to Germany.

Police say they arrested six of the 13 suspects that were under investigation and shortly detained 30 people - apparently trafficking victims - for questioning, citing uncertainty over their residency status.

The group charged each migrant between €5,000-20,000 (US$5,500-22,000) for smuggling them into the country through companies in Romania and Germany. Those companies issued invitations that allowed the Vietamese to obtain Schengen visas, according to Europol.

The migrants arrived in Europe in private cars and were stripped of their belongings and held hostage until they worked off their “debts” to the smugglers, police say.

“People involved in migrant smuggling are far from being benevolent individuals trying to help other people get a better life,“ said Robert Crepinko, Head of Europol’s European Migrant Smuggling Centre. “They are ruthless criminals who will do everything to make money.”