A group of determined activists are occupying customs offices, carrying out their own border controls and are monitoring banks in a continued effort to provoke change in Lebanon even after last year’s months-long massive anti-corruption protests died down, local newspaper L’Orient le jour reported on Thursday. 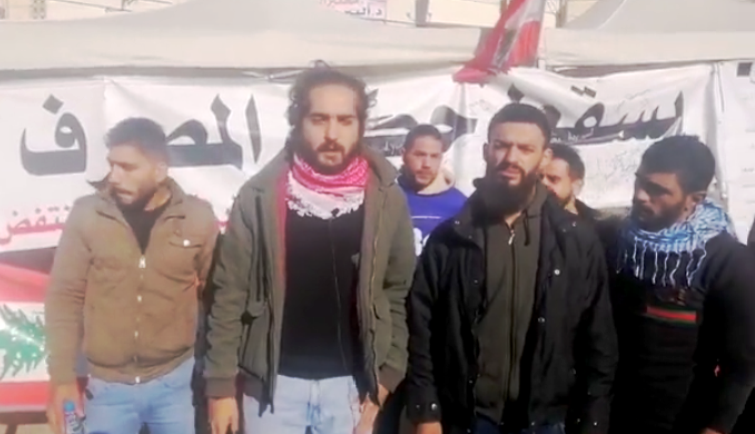 Activists in the front of their tent in the town of Halba. Credit: NNA Agency“We are a group of young people gathered around the same objectives,” activist Ghayth Hammoud told the paper. Apart from demanding an end to Lebanon’s sectarian political system, a cancellation of the public debt and an end to the way banks are treating their clients.

Ghayth said the group has no political orientation but that the protest is a “class struggle against the 1% of the population that stole the money from the remaining 99%.”

Lebanon was ranked 137th on a list of 180 countries Transparency International analyzed in its Corruption Perception Index, where the countries perceived as least corrupt top the list.

Often in defiance of violent suppression, over a million people took to the streets last year to demand an end to government corruption, the recovery of stolen funds and holding the corrupt accountable.

The protests eventually died down but activists in the northern region of Akkar remain persistent.

On the top of the region’s 65 percent poverty rate, Akkar had in the past years to deal with a massive influx of refugees from neighboring Syria.

In the town of Halba, the protester’s “sit-in tent” that they built in October has turned into their headquarters from where they are coordinating their actions.

Most of the members of the group are unemployed young men between 15 and 30. “We devote our days and nights to the revolution” a protester told the paper. The group claims to have two hundred people regularly attending sit-ins and protests.

The local NGO Mada estimates that 80% of the Akkar population lives in villages. The ongoing import of fruits and vegetables from abroad despite the import ban on seasonal crops hurts them the most.

Having lost trust in the government, locals now turn to the protesters to fix their problems.

Over the past few weeks, the group has been stopping trucks coming from Syria to inspect whether they are smuggling fruit and vegetables that are not supposed to be imported according to the seasonal calendar.

Activists have also been accompanying clients who were entering banks to withdraw money. Banks often refuse to allow people to withdraw as much money from their accounts as they want.

One incident at the beginning of the year put one bank under a twelve-hours siege when protesters and riot police clashed after a client was not given the exact amount of money he asked for.

“Law enforcement chose to protect bank owners over the people” Ghayth said “Our goal is to ridicule the bank regime that keeps Lebanese people hostage for 30 years,” he told the paper.

The activists even took over a customs control office without encountering any resistance.

When asked how security was reacting when they arrived, Khaled Nasr, a 27-year-old activist replied: "What security?"