A South African judge issued an arrest warrant on Tuesday for Jacob Zuma, the country’s former president, after his defense claimed he was too ill to appear in court to face the multiple criminal charges related to transactions with a French weapons manufacturer, South African Broadcasting Corporation reported. 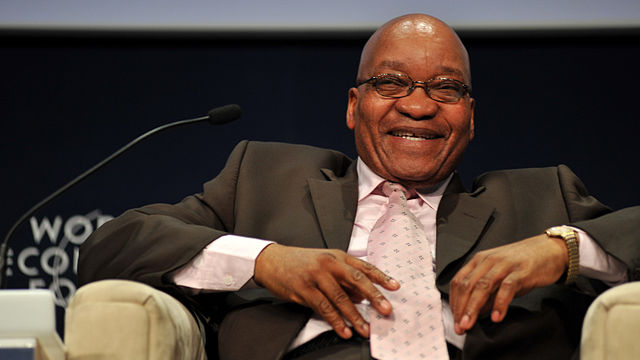 Jacob Zuma by Eric Miller (CC 2.0)Zuma is accused of corruption, money laundering, and racketeering related to a deal that was signed in 1999 with Thales, a partially state-owned French company that is now one of the largest defence contractors in the world.

The 77-year-old former president is facing allegations that he had received bribes from the company through Schabir Shaik, his former financial advisor who was convicted on charges of fraud and corruption in 2005.

Zuma’s lawyer, Daniel Mantsha, expressed disappointment with the court’s ruling, saying his client’s illness was verified by a team of military medical doctors who even offered to appear in court to verify medical reports confirming Zuma’s inability to attend the hearing.

“It sends a message to the people that our courts have no sympathy, no compassion, and that is not something that should be celebrated,” Mantsha stated. He confirmed that Zuma is currently out of the country, which appears to give credence to reports that said he is in Cuba seeking treatment.

Local media outlets reported that Judge Dhaya Pillay, who issued the arrest warrant, questioned the veracity of the medical report, asking why some of the dates on the report appeared to have been changed, and that there were no medical numbers that indicated whether the doctor filing the report was registered or certified.

The former president’s arrest warrant will not come into effect until his case resumes on May 6.

Charges against Zuma in this case represent a fraction of the public inquiries that have been made regarding his alleged corruption throughout his nine-year tenure as president.

Previous OCCRP investigations have helped uncover a slew of corrupt ties and shady deals between Zuma’s administration and the well-connected Gupta family, which South African authorities accused of “state capture” - a systemic political corruption in which their interests influenced the state's decision-making processes to their own advantage.

Zuma’s party, the African National Congress, which has ruled the country since Nelson Mandela was elected in 1994, forced him to step down from the presidency in February of 2018 amidst the various allegations of corruption.

The former president still maintains a sizable number of loyal supporters, who argue that he is being unfairly targeted by politicians and that the media has already presumed his guilt.

“I have always been innocent,” Zuma said while addressing his supporters outside of a courthouse last May.