A just-concluded pre-trial investigation of Vladimir Romanov, the former owner of Lithuania‘s Ukio bank suspected of looting it for millions of euros, hinged on a key episode detailed in OCCRP’s 2018 account of leaked information in the Paradise Papers. 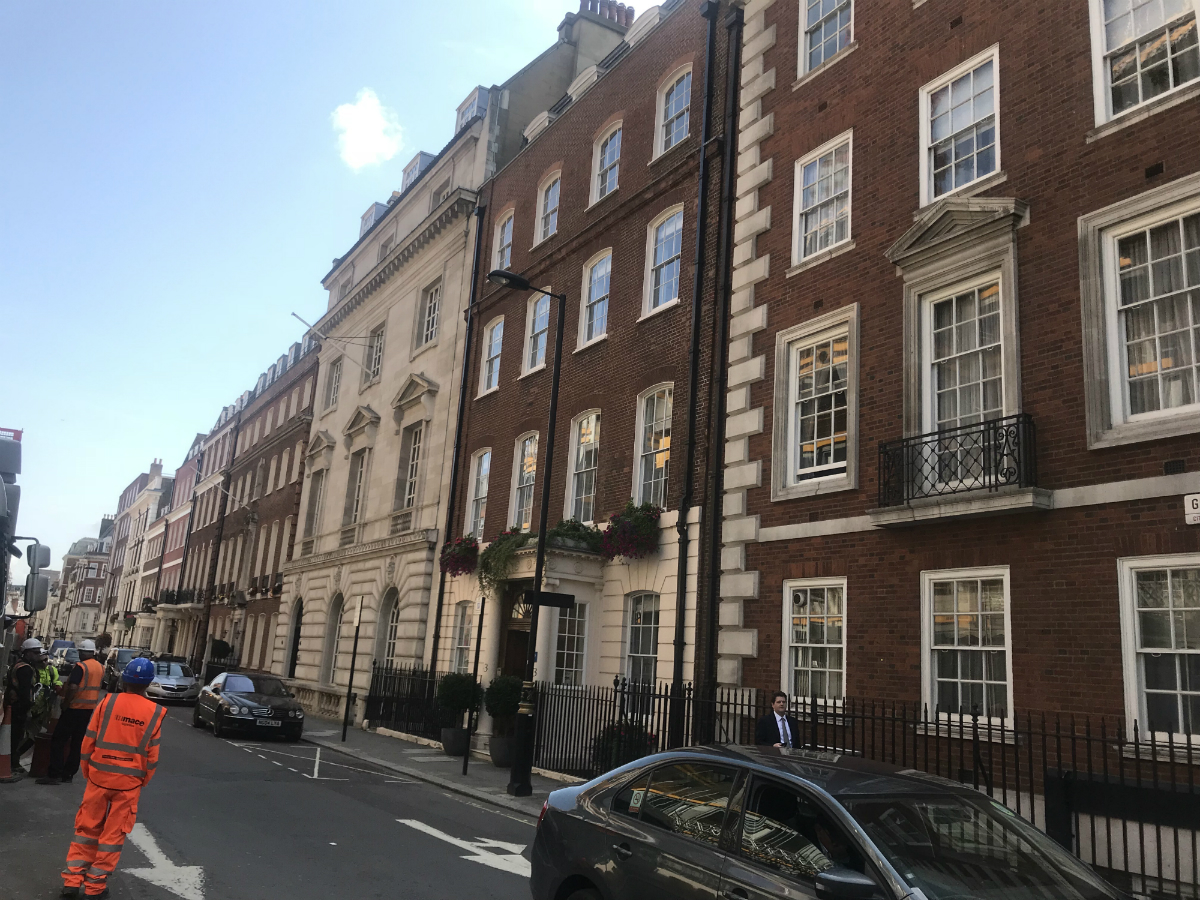 Grosvenor Street property (Photo: Sarunas Cerniauskas, OCCRP)Ukio bank collapsed abruptly in 2013, as the Lithuanian government stepped in and took control. An announcement came soon after that a misappropriation of bank assets was being investigated. Romanov fled to Russia where he was given asylum and remains.

Tuesday, Lithuanian authorities announced they were finished investigating one of several cases related to Romanov and the bank. Romanov and 12 others now stand accused of diverting bank funds into their own pockets. According to Ugnius Vycinas, the prosecutor in charge, assets related to the case have been frozen, so the chance of recovery is good.

In a press conference, the Lithuanian Prosecutor General‘s Office and the Financial Crime Investigation Service said the case reaches across Europe to the UK and the Isle of Man and other jurisdictions. Later, the prosecutor’s office confirmed that key to their case has been data leaked in the Paradise Papers, a global investigation led by Süddeutsche Zeitung and the International Consortium of Investigative Journalists.

A building at London’s Grosvenor Street 43 which figured in the Paradise Papers is especially important.

In 2008, a Lithuanian company called Tristanas received a large loan from Ukio, with the official explanation that it was for construction project in Daniliskes, a settlement on the outskirts of Lithuania’s capital. But Tristanas never laid a brick in Daniliskes.

Instead, the money was wired abroad and ended up in the Grosvenor Street property, which  is owned by Vintage Holdings Limited, an Isle of Man company owned in turn by Romanov’s niece Julija Goncaruk.

When Ukio collapsed in 2013, law enforcement began tracing the deals that allegedly funneled Ukio’s assets to Romanov and his inner circle.

In 2014, authorities moved to seize the Grosvenor building, but it appeared to have been already sold. However, most of the money from the GBP 21 million (US$27.52 million) deal was still in reach, and was frozen.

A legal battle for the money followed, pitting Ukio’s liquidator on one side, attempting to recover the allegedly stolen assets, and on the other, Exclusiva General, a BVI company claiming to be a major creditor of Vintage Holdings.

Lawyers, the Paradise Papers show, claimed that the beneficiary of Exclusiva was Tomas Lesciukaitis, a former law enforcement officer currently working in a small municipal company in Lithuania.

But Romanov’s niece has said, leaked email in the Paradise Papers show, that her mother (Romanov’s sister) owned Exclusiva, not Lesciukaitis.

Lithuania’s Prosecutor General’s Office confirms in the pre-trial investigation just wrapped up that money from the Grosvenor deal represents a major  chunk of the assets allegedly siphoned from Ukio. Some GBP 18,194 million ($23.85 million) in bank accounts is frozen.

But the 13 suspects are believed to have taken €41.6 million ($45.88 million). Prosecutors say a larger effort is underway  to recover Ukio’s assets and bring those responsible to justice.

They said that while Romanov and his sister Olga Goncaruk are two of the 13 indicted, charges against his niece have been dropped.

While still operational, Ukio played a key part in Troika Laundromat – featured in a major OCCRP investigation into money laundering.