Press Freedom and Corruption in the Dock 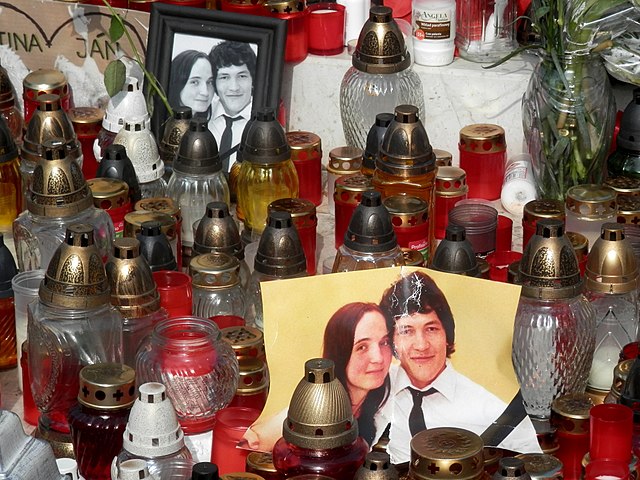 Their murders — which marked the first time a journalist has been killed in Slovakia since it gained independence in 1993 — unleashed unprecedented public protests, forced Prime Minister Robert Fico to step down, and led to a domino-like series of resignations across several public offices. The scandal also heralded the shock election of Slovakia’s liberal president, Zuzana Čaputová, who has been cast by the media as a “ray of hope” for all of Central Europe.

Coming less than six months after the violent assassination of investigative journalist Daphne Caruana Galizia in Malta, the couple’s deaths also sparked renewed concern about the safety of the media in Europe and the vital role of the press in safeguarding democracy.

Below is a Q&A about the trial of their killers, in what is being described as a historic moment for Slovakia.

What is the trial about?

Kuciak and Kušnírová were murdered at their home in the southwestern village of Velká Mača, about 60 km from Bratislava, on the evening of Feb. 21, 2018. Evidence given in court detailed how the assassin shot the journalist as soon as he opened the door, then caught sight of his fiancée. Realising she would be able to identify him, he chased her into the kitchen and gunned her down too.

The timeline of the murders were pieced together during an 18-month investigation by the Slovakian Special Prosecutor’s Office that was initially marred by allegations of corruption and incompetence. The findings were read out in the opening day of the trial in the Special Criminal Court, where four people stand accused of planning and carrying out the assassination. Their case is being heard by a three-judge panel, led by the respected Ružena Sabová.

The killing of the young couple on the verge of marriage shocked Slovakia. Within days, tens of thousands of citizens flooded the streets demanding action against government corruption and the influence of powerful organized crime groups. The trial of their alleged killers is now being seen as a key test of the Slovak judicial system’s ability to hold the powerful, wealthy and corrupt to account.

Who is on trial?

Four people are currently on trial for the killings. A fifth man, Zoltán Andruskó, was sentenced to 15 years in prison in December 2019. 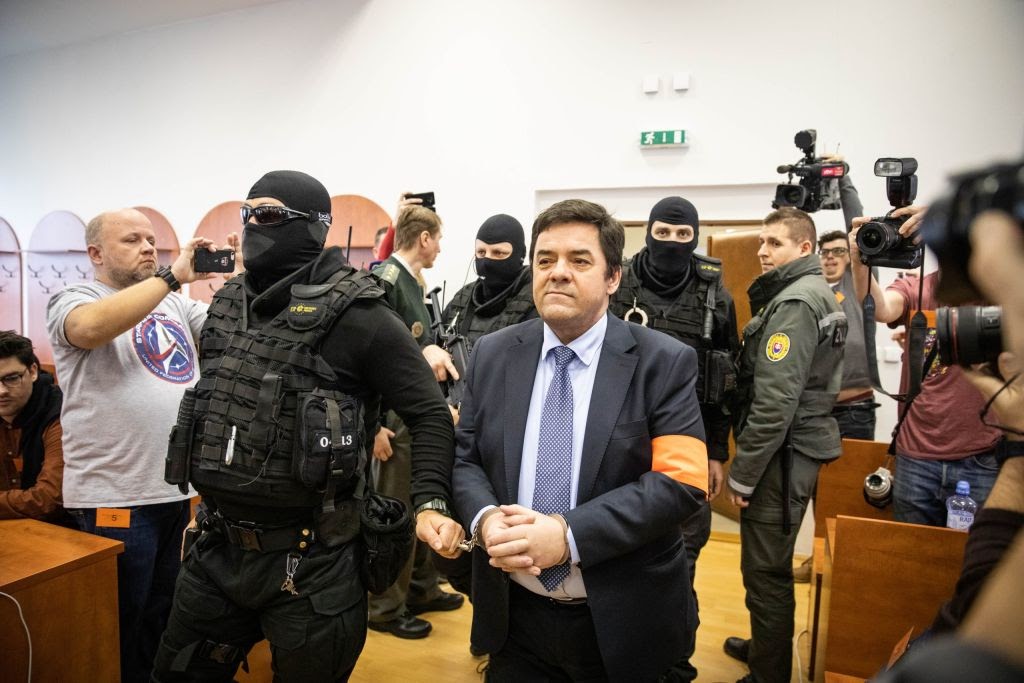 Marian Kočner is led into court in the first week of the trial (Source: Branislav Wáclav / Aktuality.sk)The key suspect is Marian Kočner, a rich and prominent Slovak businessman who for decades has been rumored to have ties to organized crime. His alleged close relationship with powerful officials, including ex-Prime Minister Robert Fico and former Prosecutor General Dobroslav Trnka, however, meant he was seen as virtually “untouchable” for many years. Over 6,000 text messages, made public by prosecutors in fall 2019,  as well as leaked audio files from Slovakia’s “Gorilla” corruption scandal, suggest that Kočner secured some of his seeming “immunity” by collecting compromising information on important people around the country.

Kočner is accused of masterminding the hit on Kuciak, who had been investigating his alleged manipulation of VAT for local media outlet Aktuality.sk. In one phone call, which the journalist recorded and turned over to police, the businessman openly threatened him, saying: “As soon as I find some … dirt, wrongdoing, or crimes on you and your family, you can be sure I’m going to make it public.”

The other people who have been charged in connection with the murder include: 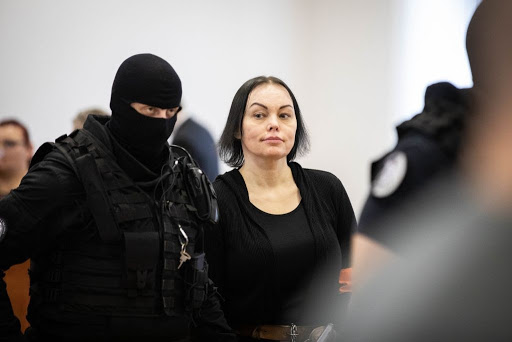 Alena Zsuzsová, who only appeared in court for the first two days of the trial (Source: Branislav Wáclav / Aktuality.sk)

Alena Zsuzsová, a former translator from southern Slovakia, has known Kočner since 2012. By her own admission, she has close personal ties to the businessman: Though she denies allegations that she was his mistress, Kočner is the godfather of her child and apparently showered them with lavish gifts, paid for their holidays and bought them expensive cars. Messages from Kočner’s phone also showed her communicating with prominent politicians and public officials on his behalf. 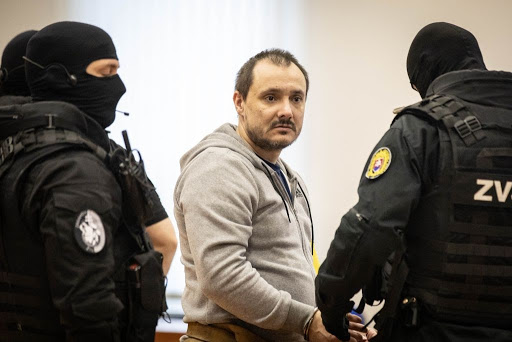 Tomáš Szabó (Source: Branislav Wáclav / Aktuality.sk)Tomáš Szabó and his cousin Miroslav Marček are accused of actually carrying out the killings. Tall, muscular, and tattooed, with a strong jaw and a shaved head, former police officer Szabó even looked the part of an assassin for hire, though it was the ex-soldier Marček, who confessed to pulling the trigger. The two men are also on trial for a third, unrelated murder of Slovak entrepreneur Peter Molnar in 2016, suggesting they have a longer history as hired assassins than has previously been reported.

Zoltán Andruskó is a former pizzeria operator who acted as the middleman between Zsuzsová and the four defendants. He began cooperating with police in 2018 and his testimony formed a bedrock of the special prosecutor’s investigation and indictment. He says Zsuzsová hired him to kill Kuciak for 50,000 euros, a job that he subcontracted to the two cousins Szabó and Marček. He was sentenced to 15 years in prison in late December, a more lenient sentence than the 25 years to life the other defendants face thanks to his extensive cooperation with law enforcement. 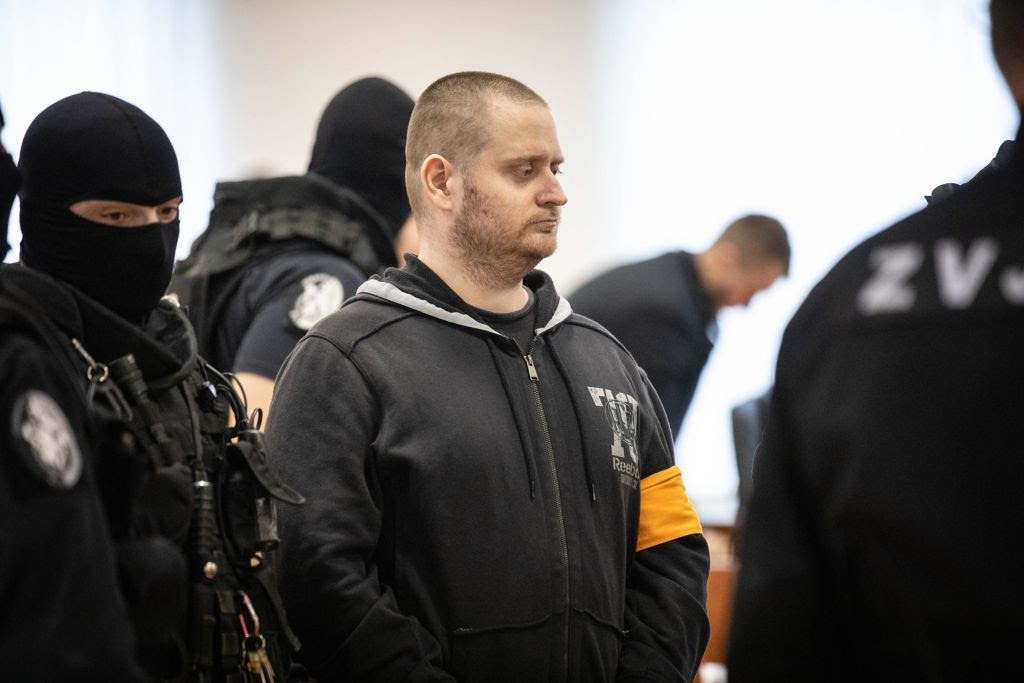 All four defendants are accused of “the grave crime of assassination,” according to the police indictment. Three of them — Kočner, Marček, and Szabó — are also charged with illegal possession of firearms.

Marček pleaded guilty to all the charges against him on the opening day of the trial. In a lengthy and detailed testimony, he described how Szabó drove him to the couple’s house on the night of the murder, and how he shot both Martina and Jan dead. His testimony largely matched the picture pieced together by police, and reported by OCCRP and Investigace.cz based on their findings, with one particularly notable exception: he admitted that he had been the one to pull the trigger, rather than Szabó, as Andruskó’s testimony had led us to believe.

Szabó pleaded innocent to the murder, saying he and Marček had only been hired to “beat up” Kuciak and that they had discovered the couple’s bodies when he arrived at the house. He admitted to carrying an illegal weapon, however, saying he had merely forgotten to turn in his ammunition after leaving the police force. Zsuzsová also pleaded innocent.

Kočner pleaded innocent to murder, but admitted to the charge of illegally carrying firearms. He, too, said this was just a result of forgetting to turn in his equipment after his time in the military.

What are the broader implications?

The case has been seen as a litmus test of corruption in Slovakia and a barometer of media freedom in the European Union.

To many, the murders showed that Slovakia -- once considered a poster child for its successful transition from communism to democracy -- is teetering dangerously close to becoming a mafia state in thrall to organised crime. Kuciak’s death has become a symbol of the media’s freedom to take on powerful figures like Kočner in the country.

The assassinations also exposed the many dangers faced by journalists in the course of their work. Press freedom Watchdog Reporters Without Borders downgraded Slovakia eight places in its 2019 index, citing threats and harassment of journalists in the wake of Kuciak’s murder.

His death marked the second murder of an EU journalist in half a year after investigative reporter Daphne Caruana Galizia was killed by a car bomb in Malta, and raised serious concerns about the strength of the bloc’s protections for journalists at a time when press freedom around the world is under threat.

What does the case have to do with the “Kočner library”?

Late last year OCCRP announced we’d come to possess most of the official records and files generated by Slovak police during their investigation of  Kuciak and Kušnírová’s murders. After  painstakingly archiving, cataloguing, and processing the data — now around 57 terabytes in total — we opened the “Kočner library” in Bratislava in early 2020, on the eve of the trial.

Our aim is to give journalists the tools to hold Slovakia’s justice system to account and ensure justice for Kuciak. We also hope that the library will serve as a repository of reliable evidence that can be used to disprove any misinformation spread by corrupt politicians or media outlets about the investigation.