Malaysia’s state prosecutor told media on Friday that he still plans to bring Goldman Sachs executives to court over their role in the country’s biggest corruption affair ever, even though the Wall Street bank is reportedly close to reaching a settlement with the US. 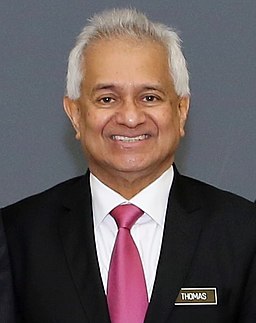 Malaysian Attorney General Tommy Thomas, in a 2019 photo. (Source: US Embassy KL [CC0])Goldman Sachs is negotiating with US authorities a US$2 billion settlement of the 1MDB scandal that would place blame on one of the bank’s Asian subsidiaries in Malaysia, Bloomberg reported on Thursday.

The 1Malaysia Development Berhad scandal (1MDB scandal) erupted in 2015 when then-Prime Minister Najib Razak was accused of funneling millions from the fund to his private bank account.

As more information emerged, the public found out that 1MDB was nearly $11.73b in debt.

Some of the debt resulted from $6.5 billion worth of bonds issued by Goldman Sachs. The bank allegedly made a $600 million profit from the deal, Bloomberg said.

A former Goldman partner previously pleaded guilty for his part in the scandal. Judicial proceedings against former Prime Minister Najib Razak are ongoing in Malaysia.

The country has raised charges against 17 Goldman Sachs executives in August and the country’s Attorney General, Tommy Thomas, told The Star on Friday that he still plans to pursue the case, regardless of any deals negotiated in other countries.

However he did note that "the door to settlement is always open.”

Following the same line as Malaysian Prime Minister Dr. Mahathir Mohamad, he said the country will seek compensation from Goldman Sachs that includes the $6.5 billion value of bonds the bank arranged for 1MDB, plus interest. That brings the total to over $8 billion.