United Kingdom has suspended a convicted prisoner exchange agreement with Pakistan, signed in November 2018, due to leniency in the law and punishment to drug smuggler criminals in Pakistan, Dawn has reported. 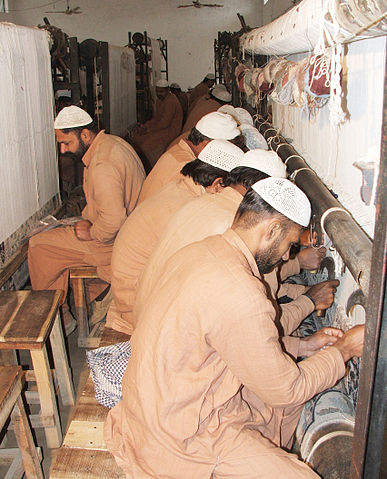 Pakistani prisoners make carpets in a prison in Faisalabad (Photo: Tariq Babur (CC-BY-SA 3.0))Shahzad Akbar, Special Assistant to the Prime Minister, however, told OCCRP that “the agreement has not been suspended.” He did not offer further details.

The agreement was also about strengthening the important law of mutual legal assistance, extradition requests and steps to combat money laundering, with Britain to obtain foreign jurisdictions of financial crimes involving Pakistani citizens.

Shozab Abbas, head of the Overseas Pakistani Division of the Foreign Ministry, told legislators that “Britain is not willing to continue exchange of prisoners’ agreement as the drug traffickers, serving their sentences in British jails, should not be let pardoned in Pakistan after exchange.”

He stressed that the equal punishment should be applied against them in Pakistan.

A senior Islamabad-based international law expert, Osama J. Malik, told OCCRP that Britain has suspended the prisoner swap agreement over concerns that those convicted of drug related offenses had their sentences substantially reduced.

“Under the agreement the sentence cannot be changed without the consent of the transferring state,” Malik said.

The UK has previously suspended another agreement, signed in 2008, for the same reasons.

Then, in 2015, the then Pakistani interior minister, Nisar Ali Khan, had stopped all prisoner exchange agreements after many Pakistanis convicted abroad were released upon their repatriation due to collusion among authorities.