A subsidiary of a major Polish oil company that operates in Lithuania received hundreds of millions of dollars in discounts for freight transportation along with other special treatment from Lithuanian Prime Minister Saulius Skvernelis’s government, according to an investigative report by 15min.lt. 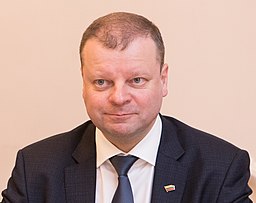 Saulius Skvernelis, Lithuania's Prime Minister. Photo: Ināra Mūrniece tiekas ar Lietuvas premjerministru [CC BY-SA 2.0]Beginning in the fall of 2016, Skvernelis attended two secret meetings — one as a candidate for prime minister and another after winning the election — with Jaroslaw Kaczynski, the leader of Poland's Law and Justice party, to discuss Orlen Lietuva’s financial issues, 15min reported Monday, according to its sources. On Thursday, the prime minister confirmed these meetings took place.

Following these meetings in Warsaw, Orlen Lietuva saw many of its financial burdens reduced by Lithuanian authorities.

Beginning in about 2008, the oil company subsidiary faced a series of financial issues, ranging from problems with railway transportation to changes in tax laws. As a result, according to the 15min report, it racked up millions in debt.

Orlen Lietuva received hundreds of millions of euros in relief after the meetings between Skvernelis and Kaczynski, 15min reported. The meetings were organized, in some cases, by former-basketball coach and now-businessman Tomas Pačėsas, the news site reported.

Skvernelis denied to 15min that there were requests to aid the subsidiary. He also denied to 15min the meetings were organised by Pačėsas, saying they were officially organized by his office. But Pacesas, the former basketball coach, confirmed to 15min his role in organizing those meetings.

According to the 15min report, the Lithuanian state-owned railway company declared that it suffered major losses in 2017, and it cited the agreement with Orlen Lietuva as one of the reasons.

Orlen Lietuva also pushed for and received — along with other large electrical power consumers — an energy tax exemption. Currently, the subsidiary can’t take advantage of the exemption because it owes 12 million euros (approximately US$ 13.25 million at current rates) to the state, according to the 15min report. But when that debt is resolved, the exemption could be worth about a million euros ($1.1 million) per year, 15min reported.

The company also sought and received changes in rules regarding state electrical power reserve auctions, 15min reported. Orlen Lietuva was originally barred from bidding due to its millions in debt owed to the Lithuanian state.

However, in 2017, according to 15min, the troubled subsidiary requested that companies in debt be allowed to participate in the auction. The request was granted, Aurelija Vernickaitė, the energy minister’s spokesperson, confirmed to 15min. Orlen Lietuva has since won two auctions, and the state has granted the company 6 million euros ($6.63 million) over 2 years, according to the news report.

Authorities don’t deny that the auction was tailored based on Orlen Lietuva’s request. They say the purpose was to increase competition.

After these decisions were made in 2017 and 2018, 15min reported that Orlen Lietuva began in 2018 and 2019 to sponsor basketball clubs affiliated with businessmen in Skvernelis’s circle.

Prime Minister Skvernelis has denied that the basketball owners are “within his circle,” and he told 15min that a number of cabinet decisions that benefitted Orlen Lietuva improved Lithuania’s business conditions as well as Polish-Lithuanian relations.

BC Lietkabelis’s club president, Alvydas Bieliauskas, is a former traffic police officer-turned-millionaire businessman. Skvernelis was also in the traffic police, and it was confirmed to 15min by the prime minister’s advisor,Tomas Beržinskas, that the two men have known each other “for many years.”

Bieliauskas told 15min he retains contact with Algirdas Stončaitis, a cabinet chief of staff, but denies he is still close with the prime minister.

Public relations specialist Darius Gudelis is a key shareholder in another club, BC Rytas. 15min described him as Prime Minister Skvernelis’s “secret advisor.”

The third division league in Lithuania, known as the Regional Basketball League, also received support from Orlen Lietuva, according to the 15min report. It is managed by Gudelis and Pačėsas.