Nine Americans - including six children - are dead after a highway ambush by a cartel in the Mexican state of Sonora Monday evening. 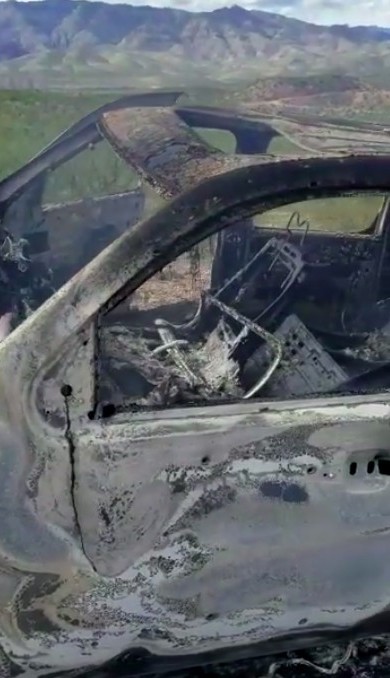 A burned out vehicle that carried several Americans killed in a cartel ambush on Nov. 4 (Lafe Langford Jr. / Facebook)
The victims were members of the Church of Latter Day Saints living in Mexico - according to a relative reached by OCCRP - and two of the slain children were 8-month-old twins.

Kendra Lee Miller, a sister-in-law to one of the victims, said the group left La Mora, Mexico, in a convoy of several SUVs, then encountered gang gunmen.

She expressed little optimism that the death of her family members would be properly investigated.

“Like my dad said, ‘It’s like asking for help from the mafia against the mafia.’ (Cartels) have infiltrated the Mexican government/military,” she said.

It’s not the first time the family involved has faced violence from the cartels.

“They had stood up to the drug cartels and they did have certain frictions either with the cartels or with neighboring communities over water rights," former Mexican Foreign Minister Jorge Castañeda told CNN.

Mexico’s civil defense agency said it, along with the military, national guard and state police are investigating the killings.

Mexican Defense Secretary Luis Cresencio Sandoval González told media that the SUVs the families were travelling in may have been mistaken for a rival cartel by the shooters.

US President Trump tweeted his support for the family, condemning the attack and offering military support.

“This is the time for Mexico, with the help of the United States, to wage WAR on the drug cartels and wipe them off the face of the earth. We merely await a call from your great new president!” Trump wrote.

Another relative of the victims, Lafe Langford Jr., posted to social media video that he said shows the smoldering wreckage of several vehicles, with bullet holes dotting the sides.

“It is with heavy hearts and unspeakable sadness we inform you that the two missing mothers - Christina Langford and Dawna Langford - along with many of their precious innocent children have been slaughtered and gone to their Rest,” he posted to Facebook, alongside videos of Mexican news coverage.

The governor of Sonora condemned the attacks, saying the deaths filled her with “deep pain.”

“I don't know what kind of monsters dare to hurt women and children,” Claudia Pavlovich wrote on Twitter.

It’s the latest in a series of high-profile attacks plaguing western Mexico.

The failed arrest of one of El Chapo’s son prompted a public report into what went wrong. In the aftermath, a faction of the Sinaloa cartel held the city of Culiacan for several days.