Venezuela: Russian Cash vs. US Sanctions

As the US tried through sanctions to limit Venezuela’s involvement in the global financial system as a way to oust Venezuela’s leader Nicolas Maduro, Russia shipped loads of cash to the South American country. 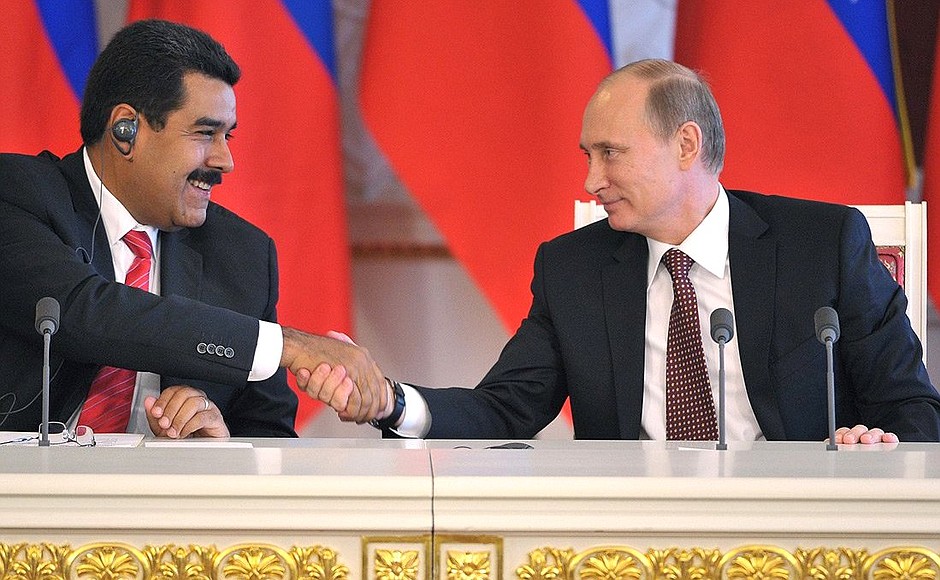 Despite the US sanctions, Putin continues to support the regime of Nicolas Maduro (Photo: kremlin.ru)Some US$315 million in dollar and euro banknotes, according to Bloomberg, were flown from Moscow to Caracas in six shipments from May 2018 to April 2019.

Bloomberg cited data collected by ImportGenius, including Russian customs records, which tracks shipping activity around the world. The data includes cash from lenders run by governments to Venezuela’s development bank.”

In April this year, for instance, ImportGenius’ data showed that some $97 million in cash was sent from the Moscow’s Evrofinance Mosnarbank to Banco de Desarrollo Economico y Social de Venezuela, also known as Bandes. Evrofinance is reportedly a joint venture between Bandes and Russia’s state property management agency.

In January, according to ImportGenius, Russia’s Gazprombank, a stat-controlled lender with a stake in Evrofinance at the time, sent $113 million in 100-euro bills to Venezuela.

The US Administration, according to a Treasury Department notice, placed Evrofinance Mosnarbank on its sanction list in Marc, for supporting Venezuela’s state-owned oil company PDVSA.

“This action demonstrates that the United States will take action against foreign financial institutions that sustain the illegitimate Maduro regime and contribute to the economic collapse and humanitarian crisis plaguing the people of Venezuela,” Steven Mnuchin, Treasury Secretary said in a statement at the time.

Several days later, Bandes was added to the same sanction list as Maduro's regime insiders, according to Mnuchin’s statement, for turning “Bandes and its subsidiaries into vehicles to move funds abroad in an attempt to prop up Maduro.”

“Maduro and his enablers have distorted the original purpose of the bank, which was founded to help the economic and social well-being of the Venezuelan people, as part of a desperate attempt to hold onto power,” Mnuchin said.

Bloomberg reported that it tried to get comments about the cash shipments from Bandes, Evrofinance and Gazprombank. Evrofinance and Bandes representatives did not respond, while Gazprombank spokesman “declined to comment on any shipments,” saying only that the bank terminated cooperation with Bandes in March this year.

As the US sanctions isolated Venezuela from regular financial systems, Caracas has also used secret gold sales to raise funds.

Besides the cash support from Russia, Maduro’s regime has been reportedly considering the possibility of using cryptocurrencies or a Russia-run global payment system to send money.