Kenyan Catholic bishops are seeking divine intervention in the battle against corruption, urging citizens to turn to God with a specially crafted anti-graft prayer. 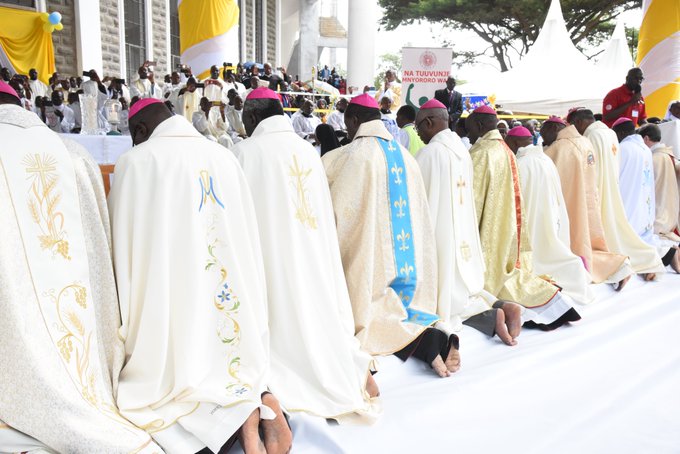 Kenyan Bishops pray barefoot against corruption. (Photo: The Kenya Conference of Catholic Bishops (KCCB))“Father in heaven, You always provide for all your creatures, so that they may live as You have always willed. You have blessed our country Kenya with rich human and natural resources to be used in honour and glory and for the well being of every Kenyan,” the prayer, released on Thursday starts.

“We are deeply sorrowful for the wrong use of these your gifts and blessings through the act of corruption, as a result of which many of our people are hungry, sick, homeless and displaced, ignorant and defenceless. Father, You alone can heal us of this sickness which leads to death,” the prayer continues.

The move is part of a six-months-long campaign the bishops launched in October, aimed at ending corruption in the African country, Vatican News reported.

According to Transparency International’s Corruption Perception Index, Kenya ranks 144th on a list of 180 countries - with number 1 being perceived as the least corrupt.

Symbolically kneeling and praying barefoot before an altar, each holding a cross in a hand, the bishops each read and signed the commitment “to work tirelessly to fight the evil of corruption in Kenya,” the Kenya Conference of Catholic Bishops (KCCB) said in a statement marking the beginning of the anti-graft campaign.

“We humbly beg You, touch our lives and those of our leaders so that we may realise the evil of corruption and work hard to eliminate it. For any citizen who has acquired anything through corrupt means, Lord, give him or her, the spirit of courage to make a restitution and come back to You,” the prayer they wrote begged.

As part of their campaign, the bishops, according to the CatholicUniverse, also banned all donations by politicians, declaring that the churches across the country will be receiving donations only electronically or via cheques.

“Our churches will not be used as political platforms or for any other motive other than for the worship of God,” the KCCB said.

“Raise up for us God-fearing citizens and leaders who care for us and who will lead us in the path of peace, justice, prosperity, progress and above all, Love.

We make our prayer through Christ our Lord.