Two brothers that ran a Monaco-based oil and gas consultancy have pleaded guilty in a US court of conspiring to bribe government officials in nine countries in order to win contracts. 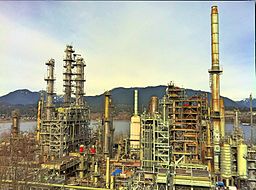 2011 photo of an oil refinery. Source: keepitsurreal (creative commons)According to Wednesday’s press release from the Department of Justice, Cyrus and Aman Ahsani bribed officials in Algeria, Angola, Azerbaijan, the Democratic Republic of Congo, Iran, Iraq, Kazakhstan, Libya and Syria for 17 years with millions of dollars.

The two also “laundered the proceeds of their bribery scheme in order to promote and conceal the schemes and to cause the destruction of evidence in order to obstruct investigations in the United States and elsewhere,” according to the DOJ.

The two British citizens will be sentenced on April 20, 2020, the Department said.

A co-conspirator and former business development director, Steven Hunter, from the UK, also pleaded guilty to one count of conspiracy to violate the Foreign Corrupt Practices Act.

The US’s investigation was made possible through cooperation with 10 other countries, according to the Department.