The Supreme Court of Tajikistan declared the National Alliance of Tajikistan, which united exiled Tajik political opponents, an extremist terrorist organization and banned its activities. 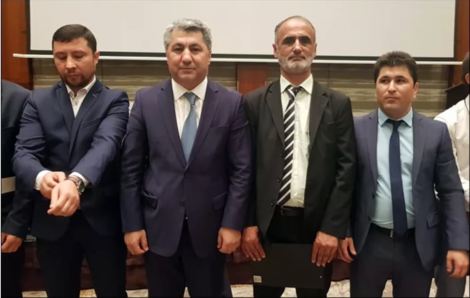 Muhiddin Kabirov, center left. (Photo: Facebook)According to the decision, the organization’s website was blocked in Tajikistan, and the import and publication of video and information containing the alliance’s propaganda was prohibited.

A report published on Friday noted that the Supreme Court of Tajikistan granted the request of the Prosecutor General to recognize the National Alliance of Tajikistan as an extremist terrorist organization.

Muhiddin Kabirov, a top official of the IRPT and the head of the National Alliance said he was not surprised.

“We expected such a turn,” he said in an interview with OCCRP. “Since earlier the government of Tajikistan issued illegal and illogical decrees to detain not only members of the Tajik National Alliance, but also members and parties and opposition groups”.

“The court decision has no legal basis. The Tajik government is used to declaring any organization whose activity is contrary to its policies extremist,” he added.

According to him, none of the members of the Alliance has ever called for extremism, terrorism or unrest.

He also stated that the National Alliance of Tajikistan will study the legal aspects of the decision and, after a meeting of board members, will express its official position on this issue.

The activities of the IRPT, which is part of the National Alliance, have been banned in the country since 2015, and the party itself has been recognized as a terrorist group. The IRPT leadership abroad rejects all allegations. The leaders of the three other organizations in the alliance also left Tajikistan.

The alliance claims that its purpose is to unite opposition forces, respect human rights, promote democracy, and encourage free, transparent elections. Yet, Tajik authorities and state-run media have repeatedly called the alliance the “heir” of the Islamic party.