More than 300 Nigerian boys and men, some as young as five, have been rescued during a raid on an Islamic school in which some of them were found in chains, beaten and sexually abused, CNN reported. 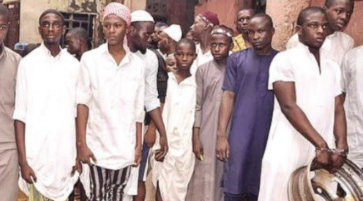 More than 300 Nigerian boys and men have been rescued during a raid on an Islamic school (Photo: Nigeria Police Force @PoliceNG )Police on Thursday arrested seven people, including six professors and the owner of the building. They are suspected of having kept the children under "inhuman conditions in the name of teaching them the Quran and reforming them."

According to police, some of the captives are from neighboring countries while some were brought there by their parents.

‘’This is not a rehab or an Islamic school, because, as you can see yourself, small children. Some of them are from abroad, from neighbouring countries, Burkina Faso, Mali, Gana and the rest are gathered here, some of them even chained,’’ local police chief Ali Janga told reporters.

In the building in Kaduna city, police have found a “torture chamber’’ where children were tied up and beaten, as evidenced by a large number of serious injuries on the bodies of the young students.

‘’They use to beat us even when we went to observe our prayers,’’ a 14-year-old victim said. ‘’It was my father who told them to bring me here,’’ the boy added.

But, the owner of the building had a different story.

He claimed that the parents brought their children to him for rehabilitation, and denies all the allegations of molestation and said that ‘’those in chains are stubborn ones who attempted to escape.’’

‘’All we do in the center is teach people Islam and all those allegations of torture and dehumanizations and homosexuality are false,’’ he said. ‘’We don’t do anything other than reciting the Quran,’’ he claimed.

Apart from being one of the most densely populated communities in the state, this part of Nigeria it is also predominantly muslim. One of the locals reported the case to the police.

‘’Authorities should check all of these illegal structures and make a proper investigation,’’ one of the locals said.

Isa Ibrahim, who tried to escape the day before the raid, explained that being there is like "living in hellfire.’’

The victims are currently in a camp where they are provided with food and medical assistance, while authorities are trying to contact their families.

‘’Yesterday when I came, one of them was vomiting blood so it was really critical,’’ a woman from the medical service said. ‘’One couldn't even stand,’’ she explained.

She also said that some of them needed to be taken to the psychiatric hospital.

Chika Oduha, a freelance journalist, described the crime as disturbing and said that this is not something unusual for Nigeria.

‘’There are many unauthorized, unregulated schools that are operating as Islamic schools to indoctrinate students to learn the Quran, to pray and just to learn the tenets of Islam,’’ she said.

It is still not clear how long the children were held in the school.