With the arrest of 29 suspects, French and Spanish national police brought down an extensive human and drug trafficking ring that often lured minors from migrant facilities and transported them to France, Europol stated in a Tuesday press release. 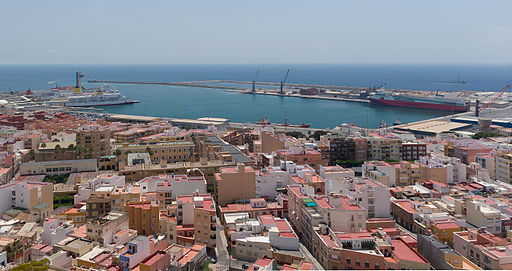 Almería, Spain, port of entry for the trafficked migrants (Photo: Jebulon, CC0 1.0)The criminal network lured North African and Middle Eastern migrants, some of whom were unaccompanied children, from Spanish protection centers. The migrants then travelled via bus to France, alongside hashish, tobacco, and small game.

Following the arrest of a Spanish citizen whose bus contained 22 unregistered migrants, police launched a formal investigation. A Moroccan national, head administrator of the company that owned the bus, was alleged to be responsible for directing the trafficking operation.

The probe led to the arrests of 26 suspects in Spain and 3 in France, the seizure of 33,000 euro and over 200 kilograms of hashish. Authorities also recovered a vehicle and a trailer, as well as documents and computer equipment in 14 house searches.

The discovery and dismantling of the trafficking ring marks a small success for French and Spanish authorities, both of whom had received assistance from Europol. However, trafficking remains a problem in Western Europe.

Spain is typically a final destination for trafficking victims from South America, Eastern Europe, Asia and Africa, or a transit hub for victims traveling to France or the United Kingdom, according to the European Commission.

The profile on Spain details that many of these victims come from Paraguay, Romania, China and Nigeria.

In France, child trafficking has become a particularly serious concern. Young Roma from southeastern Europe constitute the majority of victims, and must commit petty crimes at the behest of their families or organized crime groups.