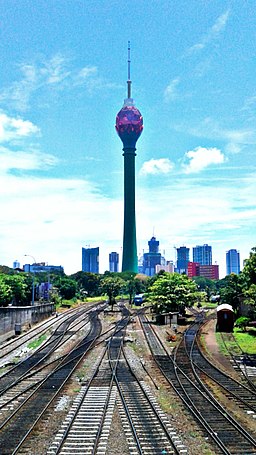 Lotus Tower, Colombo (Photo: Mohamed Shadhir, CC BY-SA 4.0)The 350 meter Lotus Tower, built at a cost of over $100 million in the capital of Colombo, is the tallest in South Asia, and “will act as a single transmission hub for telecommunications, digital TV and radio,” according to ColomboPage.

Eighty percent of funding came from China’s Exim Bank, while the Sri Lankan Telecommunication Regulatory Commission, TRC, provided twenty percent. However, after the TRC gave a little over $11 million to the Chinese contractor Aerospace Long-March International Trade Co. Ltd. in 2012, they later found the contractor may never have existed.

“In 2016, we found ALIT had disappeared. We investigated into this and the Sri Lankan ambassador in Beijing went to the address of ALIT personally on my instruction to find there was no such company,” Sri Lankan President Maithripala Sirisena said in a speech, quoted by Reuters.

“This is the money we could have spent for development of this country, for education, and medicines of patients,” he explained.