Authorities in DR Congo (DRC) detained on Sunday the former health minister, accusing him of having embezzled about US$4.3 million raised to tackle the Ebola epidemic. 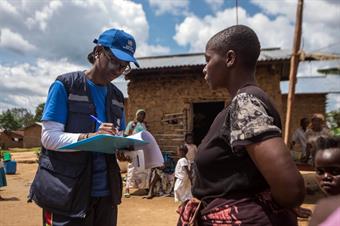 Ebola in the Democratic Republic of the Congo (Photo: World Health Organization) Oly Ilunga was taken into custody because he may have intended to leave the country and evade justice, the Congolese National Police said.

Ilunga’s defence team denied allegations that the former minister wanted to leave the country, adding that the detention affects his honor and reputation.

“He strongly reaffirms his innocence in this case and vows to defend himself,” they said in a statement.

The lawyers also said that more than $1.9 million of the sum was paid after out Ilunga’s resignation and because of that he can’t be held accountable.

For the remaining $2.4 million ‘’the accounts show that that sum was disbursed exclusively for the purpose of fighting the Ebola virus’’, they added in their statement.

Ilunga, who has been the DR's Minister of Public Health since 2016, resigned in July in protest of the president's decision to take the management of the response to the Ebola outbreak away from him.

In his resignation letter, Ilunga criticized his removal from the position and the World Health Organization's (WHO) plan to use a second experimental Ebola vaccine.

According to the latest report from the DCR Ministry of Health, a total of 3,128 cases of Ebola have been registered. While 948 people were cured, 2,095 died because of the virus.

The World's second largest outbreak was declared on August 1, 2018 in North Kivu, South Kivu and Ituri provinces. Since then more than 200,000 people have been vaccinated against Ebola.

The WHO has more than 650 people supporting the Government-led response to the disease. More than 89 million screenings within the country and at its borders have helped control the epidemic.

According to the WHO’s Strategic Response Plan ‘’the estimated funding requirement for all partners for the period July to December 2019 is US$287 million, including US$120-140 million for WHO.’’

The plan further stated that since September 10, the WHO has donated US$54.9 million but additional money is needed ’’to fund the response through to December 2019.’’

Over the last year, foreign donors provided more than $150million in aid to the Ebola response.

Ebola Virus Disease (EVD) is a rare and deadly disease most commonly affecting people and nonhuman primates and spreads to people through direct contact with bodily fluids of a person who is sick with or has died from EVD.

About half of infected people die.