Organized crime is to be blamed for the Amazon deforestation and that’s a transnational problem, Brazilian Attorney General said on Monday at the start of a two-day meeting with Eurojust. 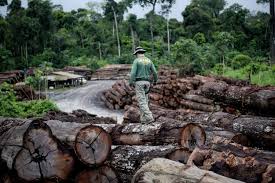 Organized crime is to be blamed for the Amazon deforestationRaquel Dodge cited the Federal Public Prosecution Service (MPF) when she said that there were ‘‘indicators of an affiliation” between those who cut the forest and those overseas who keep buying illegally harvested timber.

Most of the timber ends up being exported and this is why international cooperation and cooperative actions are an essential part of the solution to the problem.

The Amazon is the largest tropical rainforest in the world and plays a major role in the global climate.

Brazilian President Jair Bolsonaro has not condemned deforestation and supports clearing the Amazon for agriculture and mining, the BBC reported.

It’s not only deforestation that is destroying the rainforest. Multiple fires are burning through the Amazon for weeks and some of them are believed to have been started deliberately.

National Geography published a report called ‘’Inside the faltering fight against illegal Amazon logging’’ in August, tracking the work of the Brazilian Institute of the Environment and Natural Renewable Resources (IBAMA).

The report said that IBAMA’s inspectors have busted many attempts of theft and cleaning of public land for agriculture and issued fines for tough players seeking to profit from the Amazon’s riches.

But even if they dedicated they work saving the Earth's ‘’lungs’’ they are struggling under the president Bolsonaro who fired  21 of IBAMA’s 27 state superintendents and asked field agents to stop destroying tractors of illegal loggers because, according to him, it is a ‘’rarely used measure that keeps workers from resuming their illegal activities.’’

Still, IBAMA president Eduardo Bim remains optimistic, saying that all these restrictions did not affect their field work.

“We are conducting our inspections in the manner called for by law,” he said. “What I see are interpretations and rumors taken out of context that give the impression that we are not combating environmental crime. We are combating it, and we will continue to do so.”