Bullet-filled bodies of nine people were found early Thursday morning hanging on a bridge decorated with avocado murals in Uruapan, Mexico, photos posted to Twitter showed. Next to the bodies, a white banner hung with a message threatening residents if they helped certain individuals they would end up like the victims on the bridge. 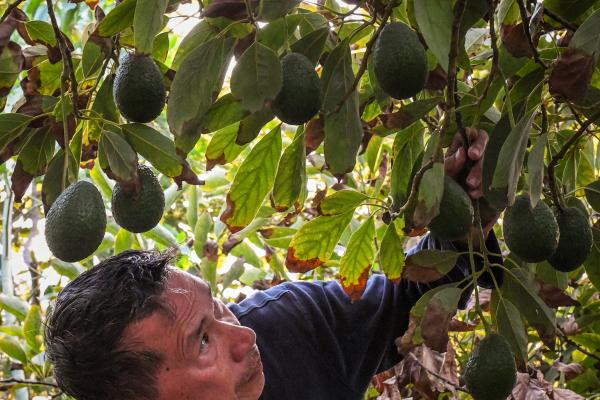 Avocado farmer (Source: US Department of Agriculture)The banner, signed by the Jalisco New Generation Cartel, also had another message: “Lovely people, carry on with your routines. Be patriotic and kill a Viagra,” it said, referring to members of the rival gang, Los Viagras.

Researcher told The Guardian that the escalating gang war over control of the drug market is extending to another lucrative business venture.

In a paper published by Ernst for International Crisis Group, he writes that the avocado industry in the state of Michoacán, west of Mexico City and where Uruapan is located, is worth an estimated US$1.5 billion.

OCCRP reported in June that roughly 48 tons of avocados are stolen daily by gangs in Michoacán and roughly 80% of the US imports of avocados comes from the state.

Because the groups want control over the fruitful trade, violence has risen dramatically.

Police also believe CJNG is responsible for seven more bodies that were found under a pedestrian bridge and three bodies along the street on the same night, according to local media. In total, at least 19 people died at the hands of CJNG on Thursday.

In a Facebook live video, the Michoacán Attorney General said the killings on Thursday night related to the struggle to control drug trafficking between cartel groups in the state.

Since 2010, CJNG has become one of Mexico’s most powerful cartels, according to experts. Now as part of the group’s move to control Uruapan, CJNG has found itself in the middle of a gang war between the Knights Templar Cartel (Los Caballeros Templarios) and Los Viagras.