In a series of investigative articles published this week, Australian news outlets allege the Chinese president’s cousin was a part of an organized crime ring with ties to the Australian casino chain Crown. 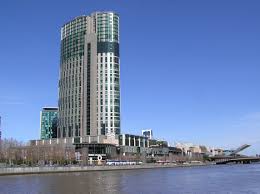 Crown Casino in Melbourne which is implicated in the scandal. (Source: Donaldytong)Ming Chai, the cousin of President Xi Jinping, was aboard a luxury jet in 2016 that was targeted by Australian authorities for money laundering, the Sydney Morning Herald reports. More surprising was the fact that Chai was a guest of Tom Zhou, who has been implicated in a large casino scandal.

The investigation focuses on how Chai and Zhou are connected and if their business interests concerning Crown Casinos constitute organized crime.

Zhou has influence over the Communist Party and is accused of extortion by the Chinese government. If Zhou steps foot in China, according to the report, he will be arrested immediately.

The ties between Zhou and Chai have led investigators in Australia to open an inquiry into why Crown Casinos was bringing in criminals to gamble, according to SMH on Wednesday. They’re also investigating if the people coming into the country were tied to organized crime or the Communist party.

Chai is known to be a high-rolling gambler, someone who comes into a casino and bets large amounts of money. Leaked documents show that in 2014 he became one of the top 50 rollers at the Crown casino, gambling nearly US$41 million.

Chai also allegedly received rewards in the form of free gambling money and tickets to the Australian Grand Prix in 2015.

Back in Hong Kong, Chai faces serious allegations of corruption but has never been formally charged, according to SMH.

He has business ties to a brothel owner in Australia and his Hong Kong business partner allegedly consults the Italian mafia and the Triads, a Hong Kong gang.

Chai is currently an Australian citizen.