Zimbabwean police detained environment and tourism minister, Prisca Mupfumira, late Thursday after the country’s Anti-Corruption Commission (ZACC) accused her of graft involving the disappearance of US$95 million from the country’s pension fund. 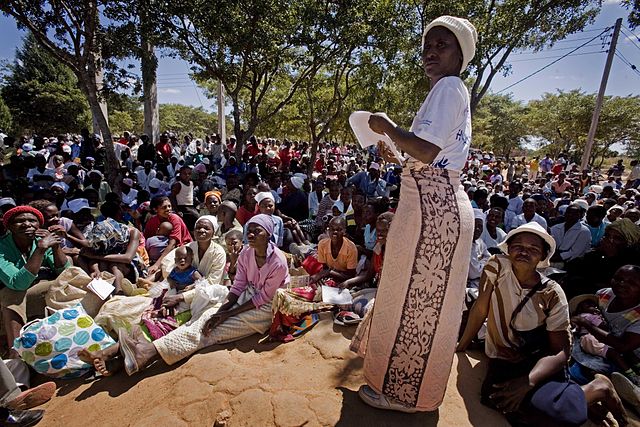 Many people in Zimbabwe still wait for food, while some officials keep the fortune for themselves. (Photo: Kate Holt/AusAID (CC BY 2.0))“We can confirm that the Minister of Tourism is currently in our custody for questioning and possible due processes,” the Commission said in a short statement.

The charges, as Reuters reported, arose from Mupfumira’s tenure as Labour Minister from 2014 to 2018, when she oversaw the state pension fund. They reportedly range from the abuse of State Pension Fund’s money allegedly invested into her political campaign, to directing some $62 million into a bank, against the advice of the fund’s Risk Committee.

She is also accused of using the Pension Fund to make certain property deals of up to $15.7 million with the same bank.

“While some amounts have been identified, where they went to, there are other amounts which the police and officers at the Zimbabwe Anti-Corruption Commission have failed to find. She has managed to hide that money very well,” Reza said.

Charles Chinyama, Mupfumira’s lawyer, reportedly said that the minister did not personally benefit from the deals and should be freed on bail.

Minister Mupfumira, according to reports, has been the first high official charged with serious financial embezzlements after the Zimbabwean President Emmerson Mnangagwa promised last week “tough action” against corruption, believed to cost the country some $1 billion per year and keeping it low on the Transparency International Corruption Index - 160th of 180, and scoring only 22 out of 100 points.

ZACC said it is currently pursuing more than 200 possible corruption cases in the country.