More than one in four people across 35 African countries paid bribes in the past year to access public resources, according to a new report from Transparency International published Thursday. 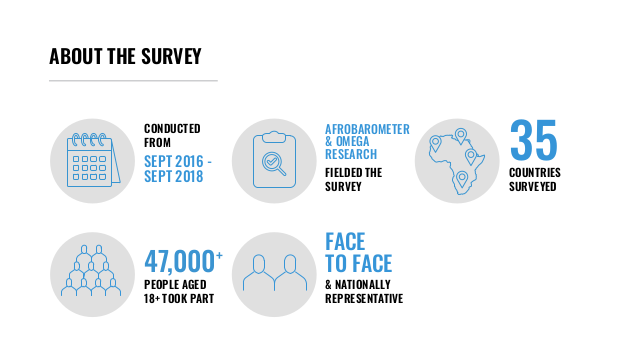 Over 47,000 people were interviewed (Source: Transparency International)Corruption continues to hinder growth in African countries, Thursday’s report says. The investigation seeks to explain which officials in the surveyed countries are the most corrupt, if citizens had trust in their government to fix corruption, and what these citizens believe will happen with anti-corruption efforts in the future.

“Africans believe they can make a difference,” Paul Banoba, Regional Advisor to East Africa, said. “Governments must allow them the space to do so.”

Police are seen as the most widely corrupt public institution, according to the report, with 47% of citizens responding they had paid bribes in the past year. Government officials and parliamentarians are seen as the second and third most corrupt groups.

Young people are at the highest risk of paying bribes in order to access public services, from filing a police report to getting health care, according to the report. Men are also more likely than women to pay a bribe to a corrupt official.

Of the 35 countries surveyed, TI reports that bribery is most frequent in the Democratic Republic of Congo. While experts estimate that the country’s mineral resources are worth nearly US$24 trillion, the central African nation has been plagued with challenges. Congo is still recovering from the 1998-2003 war and armed groups continue to fight. Because of political instability, anti-corruption measures are extremely challenging to implement.

Not everything is bleak. Over half of respondents believe ordinary people can help fight corruption and make a difference. Gambians believe that their government is also doing a good job of combatting corruption.

The report also set future recommendations for combatting corruption, including the protection of whistleblowers, political funding transparency, the public registration of shell companies and the establishment of ethical guidelines.