The Ecuadorian government deployed soldiers and police to protect locals and precious resources from organized crime groups that have established themselves in the northern part of the country where illegal mining is flourishing. 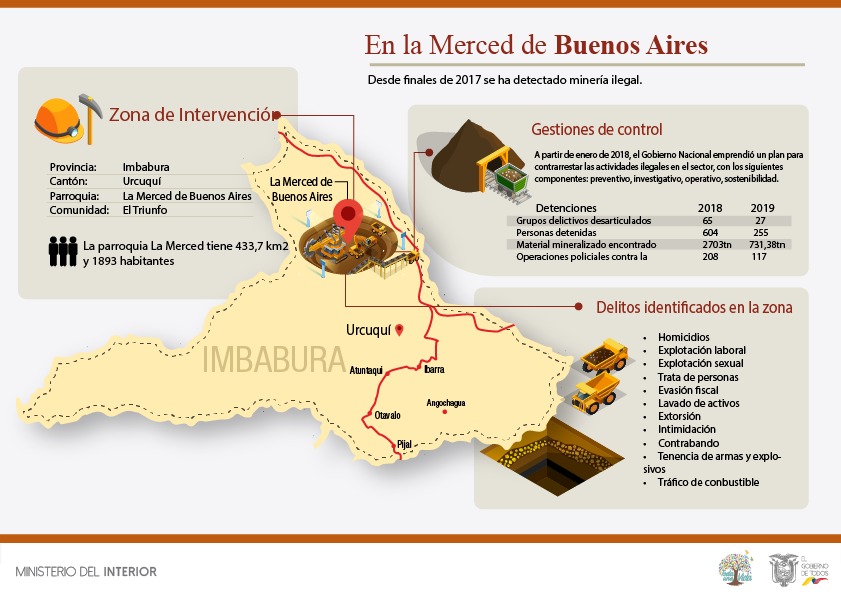 Infographic on illegal mining in Urcuquí (Photo: Gobierno de la Republica del Ecuador)Nearly 2,400 soldiers and police are stationed at the La Merced de Buenos Aires Parish in Urcuquí, Ecuador, according to a government press release. The joint operation was launched early Tuesday morning after the Ecuadorian president issued a state of emergency for the region on Monday.

Since January last year authorities have arrested 809 people in connection to the mining and dismantled 92 criminal groups that had engaged in human trafficking, tax evasion, smuggling and murder while controlling the mines.

"Illegal mining is a multidimensional threat, which in addition to affecting the safety of people and the tranquility of the area, involves a very serious environmental impact," Maria Paula Romo, Minister of the Interior, said during Tuesday’s press conference.

Photos posted to Romo’s Twitter show the seriousness of the environmental impact on the area. A 2017 photo shows the area covered in trees while a photo taken during 2019 shows the extent of deforestation because of the mines in the same area.

Oswaldo Jarrin, the Minister of Defense, said the soldiers will provide permanent safety to locals and resources in the area.

"They protect the population and ensure that lawful, commercial and all kinds of activities, especially mining, are carried out legally, as appropriate and as the country needs it," Jarrin said.

Some 2,000 people live in Urcuquí but it’s estimated the illegal mining activities have brought in nearly 10,000 outsiders, seeking to make a profit off the area’s natural resources.

Illegal mining in Ecuador is one of the most exploitive services because of how organized crime groups prey on Colombian migrants fleeing paramilitary violence, according to researchers. The United Nations Special Rapporteur on Contemporary Forms of Slavery found “slavery-like labour exploitation,” in Ecuadorian illegal gold mines.

In total, there are at least 68 illegal mining operations in Ecuador, exploiting 77% of the country’s gold, according to experts. A 2015 report by the Financial Action Task Force estimated that between six to eight tons of gold mined every year is illegally obtained.