The Chairman of Georgia’s Parliament resigned on Friday after more than 240 people, including 34 journalists, were injured and 305 were arrested as police cracked down on protests that erupted when a Russian lawmaker sat in the wrong chair during a visit to the Parliament. 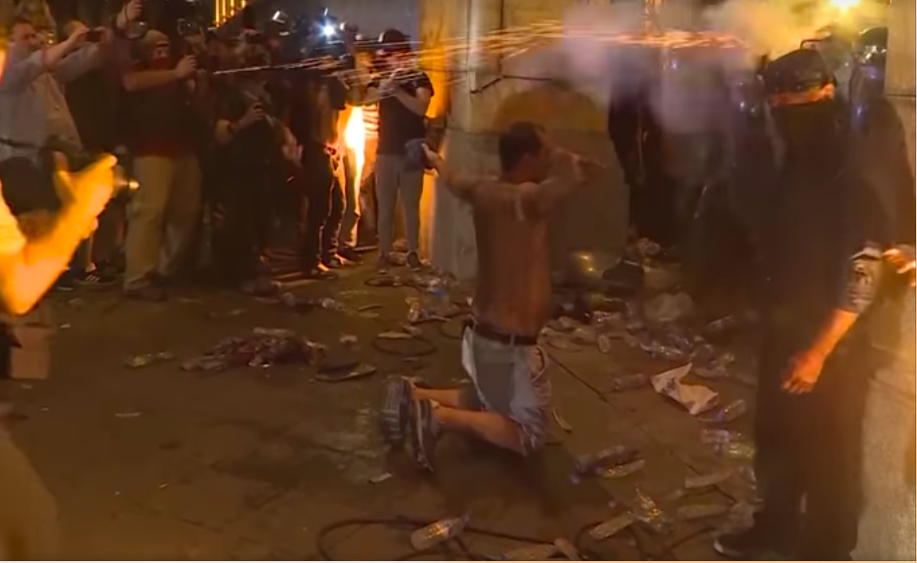 Georgian Protester Defies Police (Source: Radio Liberty)Police used tear gas, water canons and fired rubber bullets at the crowd without issuing any warning. Some lost their eyes and most of those targeted with rubber bullets suffered head injuries.

Lawmaker Sergei Gavrilov, a member of Russia’s Communist party, occupied the chair of the Georgian Parliament’s Chairman Irakli Kobakhidze during a session of the Interparliamentary Assembly on Orthodoxy (IAO) — a body set up to foster relationships between Christian Orthodox lawmakers.

Gavrilov’s move was immediately interpreted as hostile, with opposition lawmakers condemning his act and Georgians taking their frustration to the streets.

The chair he chose to sit in not only belongs to the head of the Parliament but this is where Zviad Gamsakhurdia, the country’s first president after independence from Russia sat.

Georgians believed they will never see a Russian take that seat again.

They immediately gathered in front of the Parliament building to demand the Chairman to step down for allowing the Russian to take his seat. They also requested the resignation of the Interior Minister and the head of the State Security service.

When some of the angry protesters tried to storm the building, police resorted to violence.

The Russian - Georgian relations remain strained after the country left the Soviet Union in 1991. They became even worse after Russia gradually occupied 20 percent of Georgian territory in 1992-1993 and in 2008.

“When 20% of our country is occupied by Russia, to see the Russian MPs who backed independence of our breakaway regions at Georgian Parliament addressing the audience in Russian is something we, Georgians will never tolerate!” Nana Lobjanidze wrote on Facebook.

“And, yes, I am proud that we, people act accordingly when the Government to say mildly makes awful mistakes,” she added.

Tbilisi Mayor Kakha Kaladze announced on Friday Irakli Kobakhidze’s resignation as he silently stood next to him.

Russian lawmaker Vladimir Djabarov, on the other hand, said Georgia should apologize for the inconvenience it caused to lawmaker Gavrilov.

Journalists gathered on Friday in front of the Interior Ministry for a protest they named “Don’t Shoot Us.” They demanded an investigation into the violence a day before and asked officers who shot aiming the journalist's heads to be jailed.

Georgians announced they will again protest on Friday evening.