The government of Kyrgyzstan is planning to spend $645 million on the COVID-19 crisis. But whether donations from its own citizens or grants and loans from international institutions, it is offering no detailed information on where the funds are going. One spokesperson said the government did not have the resources to track down the spending.

Compounding the issue, the country’s public procurement law was quietly changed in the middle of the crisis to ensure still greater secrecy.

This story is part of a larger project from our Kyrgyz member center, Kloop, on Kyrgyzstan's COVID-19 spending. Click to read more in Russian.

On the very day the first COVID-19 cases were identified in the country in mid-March, the Ministry of Finance published a press release calling on “every caring citizen of the Kyrgyz Republic who sincerely wants to contribute” to donate money for the fight against the virus.

To ensure transparency, the government launched a website that would supposedly allow citizens to monitor the total amount of cash received, who it was from, and how it would be spent. It even set up a commission to distribute the funds. 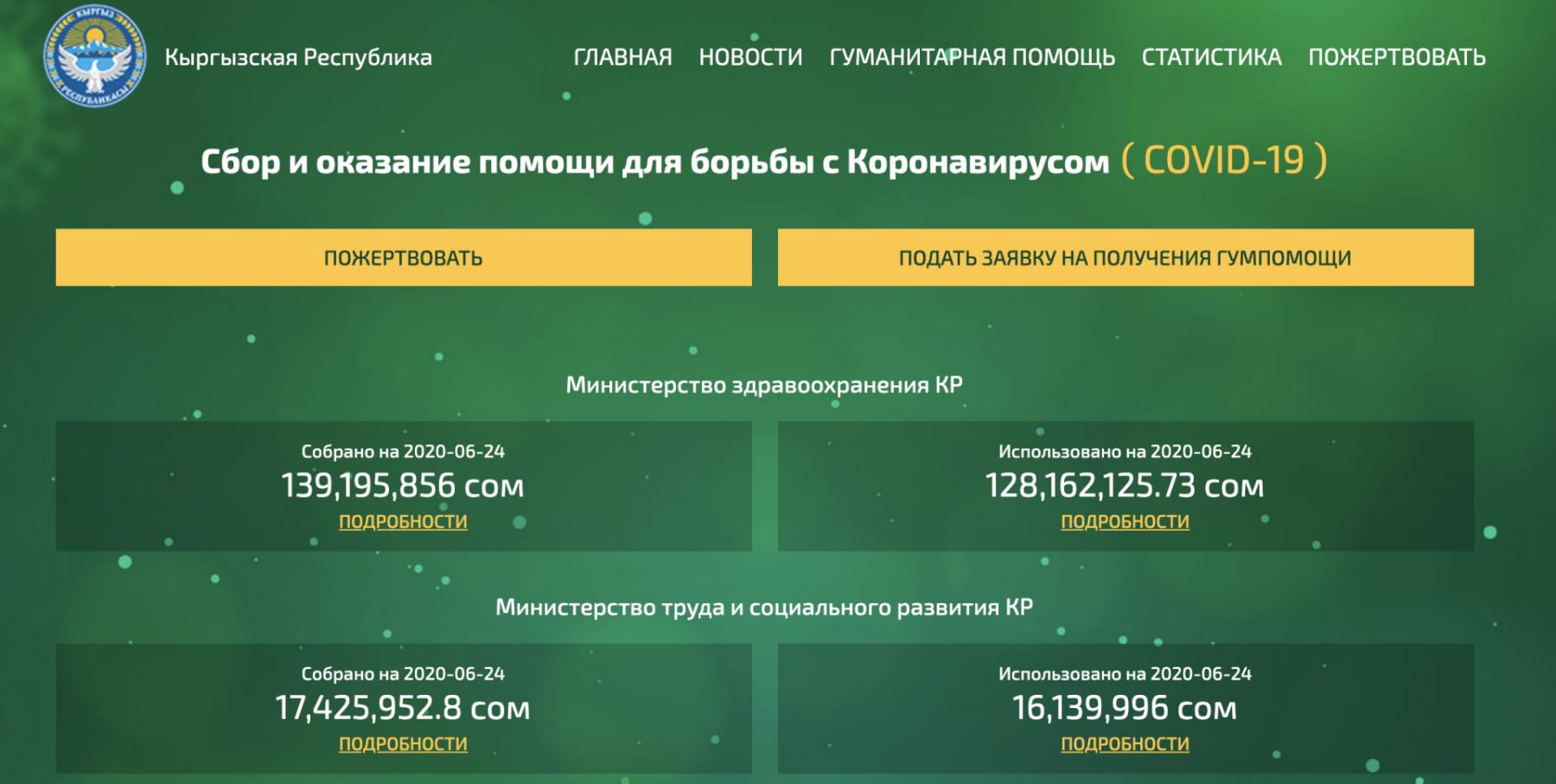 But the member of the commission from the NGO sector, Galina Chirkina, disagrees. She said that even members of the commission have not yet received all the details on how the money was spent, but the ministry of health promised to do so at the end of June.

Because the money was collected from the public, and is not technically from the government budget, there is also no oversight, she said.

In practice, the information on the site is so general that it is impossible to understand what the money was actually spent on.

A total of almost $2.2 million has been collected so far, mainly from state employees who donated one day’s salary, as well as individuals, government bodies, and local businesses. 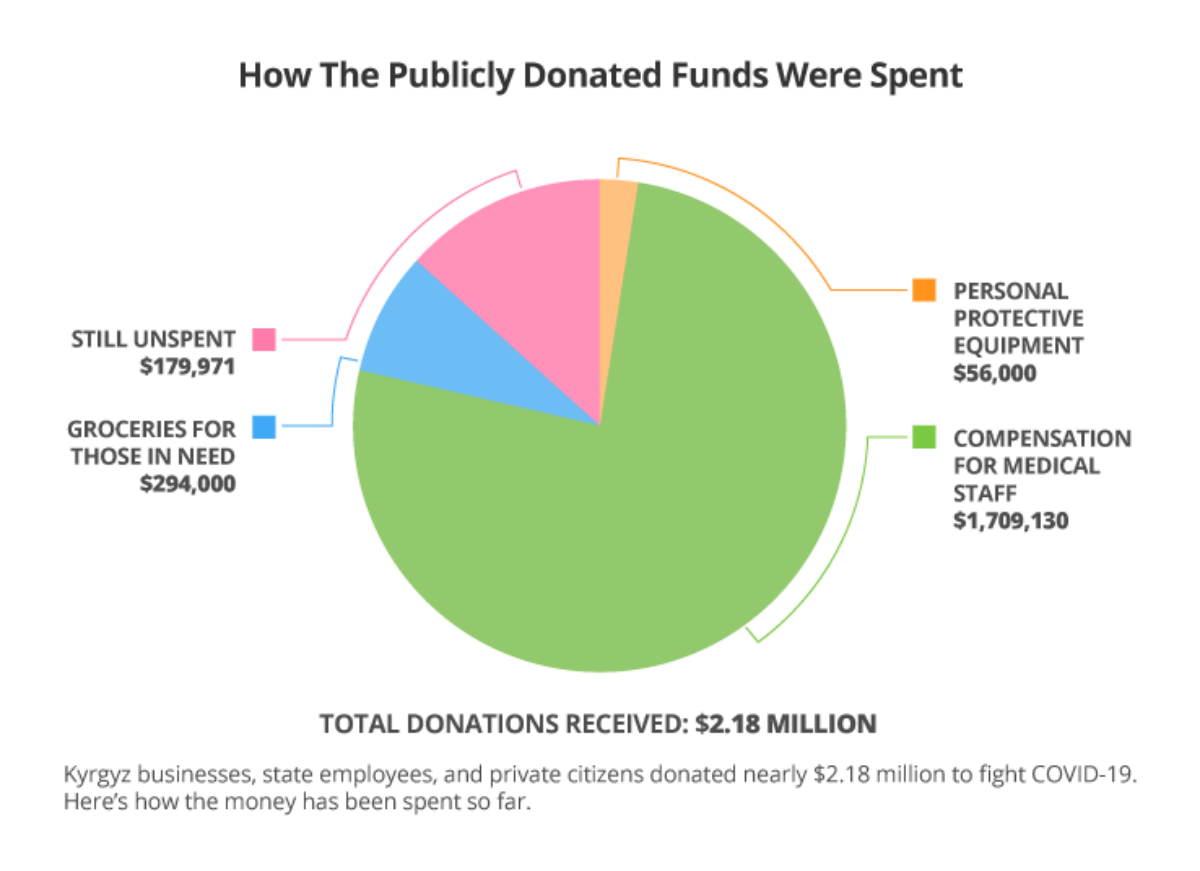 Credit: Edin Pasovic/OCCRP How the Kyrgyz government spent the funds that were brought in by its donation campaign. Click to enlarge.

Most of the donations, over $1.8 million, were transferred to a new account in the Ministry of Health and almost all of that money was spent to pay medical workers as compensation for the risk of being infected. But the site does not reveal the names of those who were paid or any justification for their varying amounts of compensation. Moreover, some medical workers have complained that they were underpaid and that compensation was distributed unfairly.

An additional $294,000 was spent on groceries for people who needed assistance during the country’s lockdown, although it is not clear how many people received them. The rest of the money has not yet been allocated.

Citizen donations represent only a small fraction of the total amount the government plans to spend to combat the pandemic, however. It has allocated another $15.7 million for COVID-19 expenses from the state budget and received $250 million from international organizations in both grants and loans. Another $377 million are expected. But there is little information publicly available about how this money has been or will be spent, and the Ministry of Finance has not yet provided all the details to reporters.

Government spokesperson Chyngyz Esengul uulu declined to comment on why the government doesn’t reveal detailed information on spending and suggested the question be referred to the institutions, such as the ministry of health and ministry of finance, that actually spend the money.

The press secretary of the Ministry of Finance, Samat Toyaliyev, called the question “interesting” and explained that he also asked for detailed information but was told that it could not be given because of a lack of resources.

“I asked the employees of the Central Treasury, they said: ‘to figure it out, one employee has to sit for at least two weeks or a month’ … I was told that it is hard to figure it out,” he said.

When he was approached by a journalist again, he dodged the question and proposed that the reporter come and work as the head of the ministry’s press department.

A change to the country’s procurement law ensures that emergency spending — whether for COVID-19 or in preparation for other crises — will remain secret.

Until April, Kyrgyzstan’s government was only allowed to forgo competitive tender processes and not to publish procurement information for urgent purchases made during an emergency.

But on April 20, citing the COVID-19 crisis, President Sooronbai Zheenbekov signed changes to the procurement law that allow the government to take these shortcuts ahead of time, in preparation for future emergencies.

The revision means the $645 million the government plans to allocate or has already partly allocated for COVID-19 spending — made up of international aid and loan packages, donations, and the state budget — can be spent without citizen oversight.

A limited set of information about 11 tenders, totaling almost $4.7 million1, has been released by the government. The data includes information about the items that were to be purchased, but in most cases the price per item is not included. Even this limited data was only revealed because the funding came from the World Bank, which mandates some disclosure.

Journalists have made freedom of Information requests for more detailed information about COVID-19 spending, but the Finance Ministry has released only some general information that does not allow for a detailed analysis.

Given the basic information provided by the Finance Ministry about the spending of international funds, reporters did their best to at least discover how the government was spending the nearly $2.2 million from the donation campaign.

The Ministry of Health began to distribute its share of the donations, over $1.8 million, on April 8. Initially, the new website indicated the names of the recipients, but after a week all the names were changed simply to “physical person.” 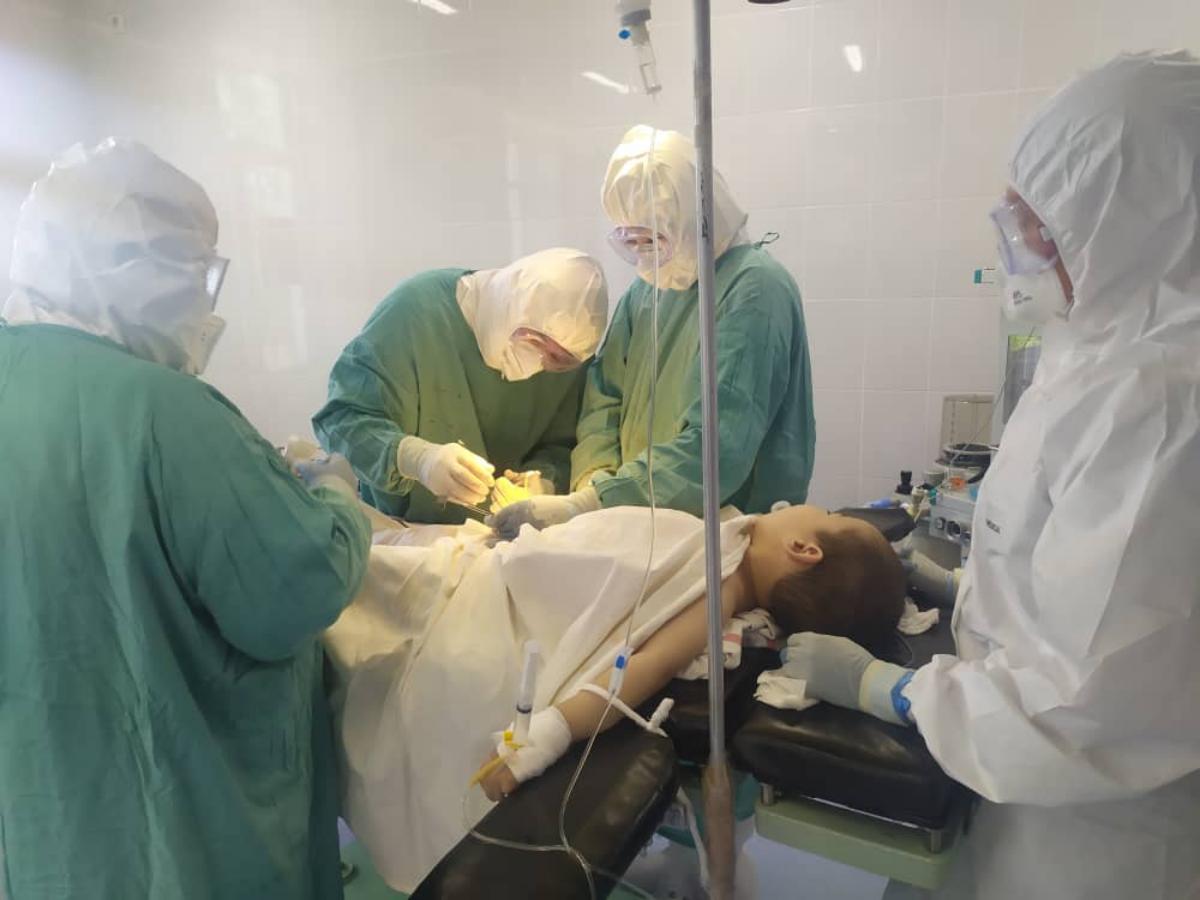 Credit: Ministry of Health Kyrgyz surgeons operate on a person who came into contact with a COVID-19 patient.

The State Committee of Information Technology, which is in charge of the website, said revealing the names would violate the country’s personal information law.

“After a legal assessment, all the data about individuals was hidden. One should not publish information about a person’s finances without permission,” the Committee’s press department said.

In a previous investigation, OCCRP and its Kyrgyz member center, Kloop, revealed how a large portion of a beloved park in Bishkek, the country’s capital, was given away to private individuals. In that case, as well, the personal information law was used as an excuse to avoid revealing information.

This excuse is frequently used by Kyrgyz state institutions to avoid disclosing financial information. For example, it has been used to avoid revealing details of company ownership and distribution of public land.

Moreover, the names of the donors are still available on the website, raising the question of why making a donation would be public information, but receiving one would not.

Meanwhile, Kyrgyz medical workers have complained that they have not received any compensation. Most have kept quiet out of fear of losing their jobs, though some have spoken to transparency activists and one group sent an angry letter to the Ministry of Health.

Bermet Baryktabasova, an activist and a specialist in evidence-based medicine, said she has received complaints from “dozens, maybe even hundreds” of workers who have received no compensation, despite working overtime on COVID-19 cases. She said that even those who were compensated received less than they were supposed to, and shared several voicemails she received from a doctor.

“I will tell you for sure that [employees of] the sanitary-epidemiological service of the Jalal-Abad region haven’t been paid,” Baryktabasova said.

The payments, she heard, were managed by the service’s HR staff. “The [medical workers who complained] saw that HR employees allocated the money to their friends and acquaintances, and not to those who actually worked,” she said.

Roman Uraimov, chief doctor of the service, said that all employees had been compensated, though some still say they have not received the full amount.

A similar situation has also occurred in other regions.

One medical worker from a hospital in the Batken region said she was forced to go to another district and work with patients suspected of having COVID-19 even though she had four children at home. She did not receive full compensation, she said.

“I was repeatedly threatened that I’d be fired,” she said. 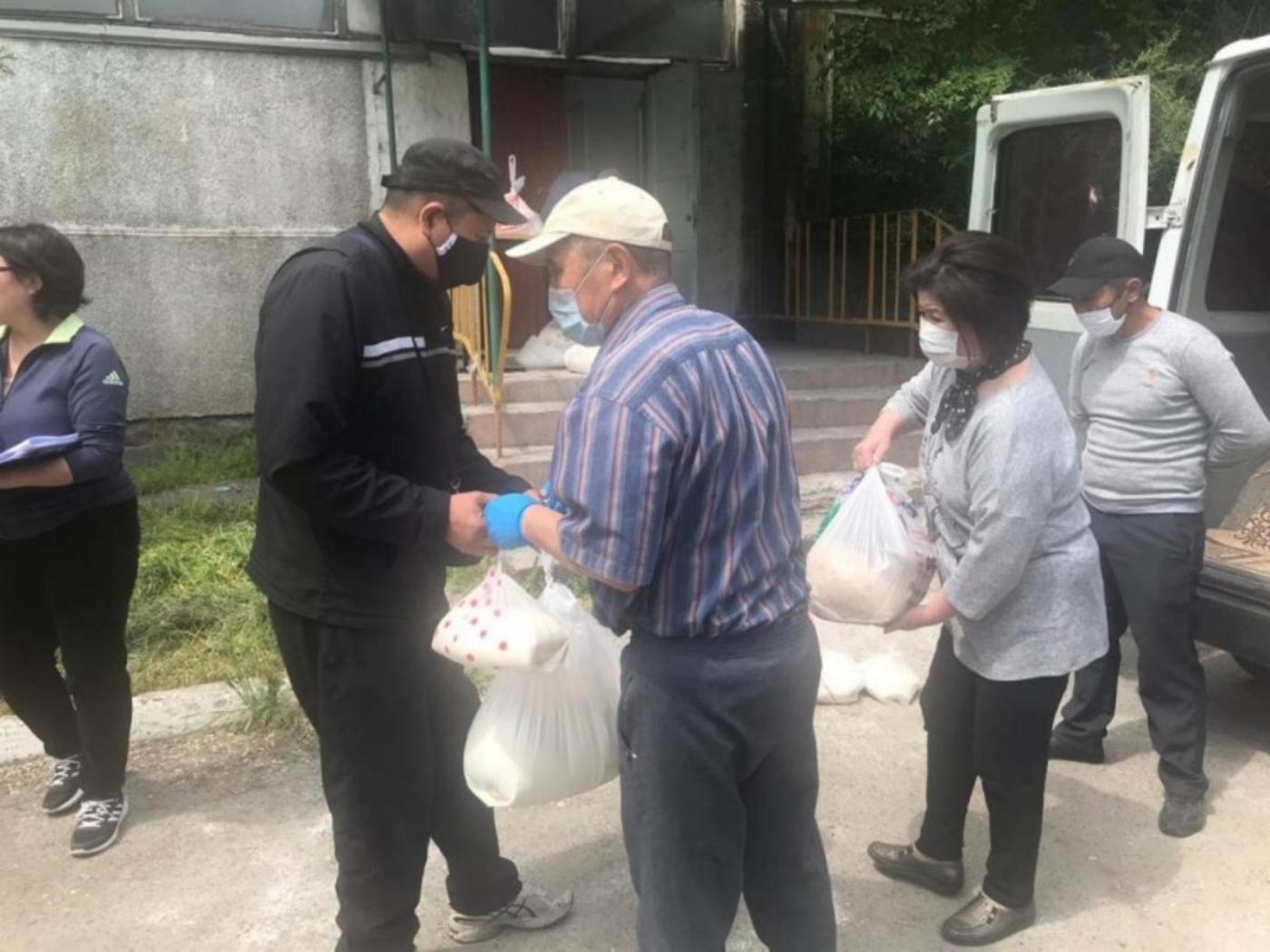 As in other countries, Kyrgyzstan’s state of emergency and associated curfew made it difficult for many citizens to earn money.

To alleviate this problem, $294,000 was spent to provide groceries to needy citizens, according to the new government website. But the data provided makes it impossible to determine how the suppliers were chosen and what was purchased.

Journalists’ attempts to determine how the Bishkek Mayor’s Office spent its $79,000 share of the money was illustrative of the problem.

The first meeting seemed promising. At the end of May, a reporter met with Balbak Tulobayev, the office’s Head of Administration. “We have nothing to hide,” the dutifully masked official said repeatedly, asking his secretary to bring document after document to show the reporter and instructing her to make copies.

The documents showed that more than 24,000 packs had been bought, but did not reveal how the suppliers were selected or what specifically was purchased.

Asked these questions, Tulobayev referred reporters to a colleague. That’s when the fight for the documents began.

Larisa Gubina, the deputy head of the social development department, was brief: “There are thousands of organisations registered on the [government procurement] portal. … [We chose] the organizations that we know as suppliers,” she said.

“According to the public procurement law, price monitoring was done and after that a commission was created and … chose [the supplier with] the lowest price,” she added, but refused to hand over the relevant documentation.

After another inquiry to both Tulobayev and Gubina, they promised to provide the information and referred reporters to a third employee. In the end, despite a Freedom of Information request, the Mayor’s Office declined to provide the requested information, describing it as “confidential.”

The Mayor’s Office did provide a list of 10 vendors to which it reached out to provide the supplies, but when reporters spoke to them, one said he had not heard of the program and two others said they were simply renting out market space, not supplying goods themselves.

“I think it was, as you say, a ‘voluntarily compulsory system,’” he said.

A representative of the Frunze supermarket, which received $42,500, more than half of the amount the Mayor’s Office spent, declined to provide details.

“The requested information, according to the opinion of our lawyers, is confidential, that is, it is a trade secret of the company. For this reason, we cannot provide the information you requested,” he said.

This characterization was disputed by Fatima Yakupbayeva, a Bishkek lawyer.

“According to the law .. the information you requested is not considered a commercial secret,” she said. “They certainly had to provide information about the products and the prices, because the buyer, according to the supply agreement, is the Mayor’s Office.”