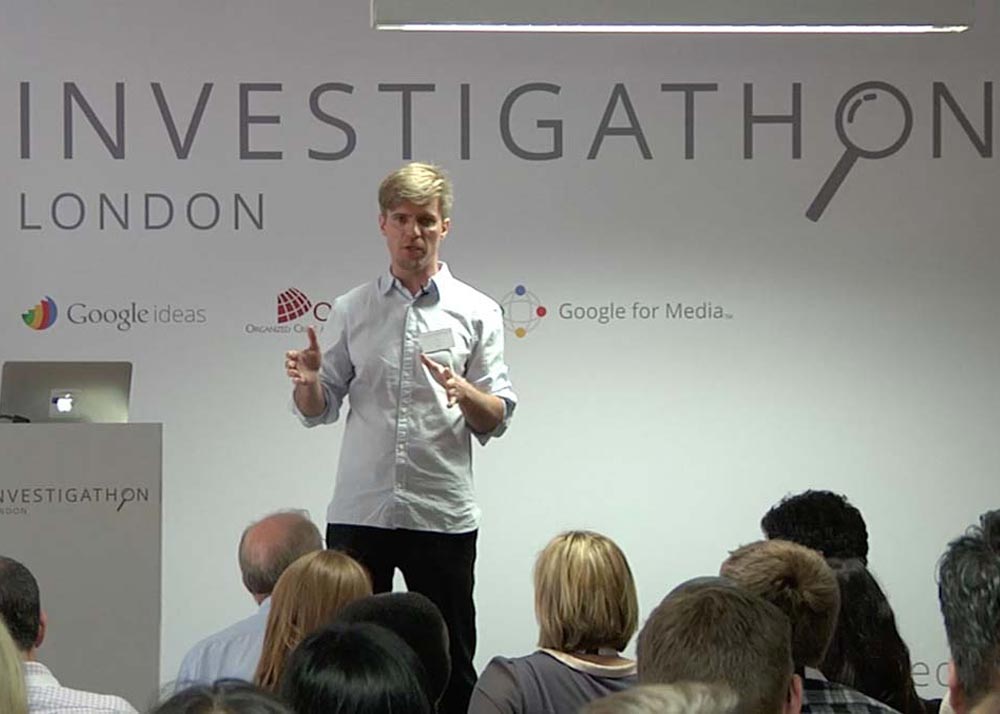 The power of technology and journalism were put on display on July 14 in London. OCCRP, in partnership with Google Ideas, brought together nearly one hundred journalists, programmers, researchers and others in a day-long “Investigathon.”  The event was both a seminar in new investigative research tools and a group investigation into UK-based company’s potential involvement in billions of dollars in money laundering activities. Scott Carpenter, deputy director of Google Ideas, opened the event.

Dan Russell, a research scientist at Google, taught attendees how to use Google’s lesser known advanced search tools in investigations. In a simple example, he combined a photo he took of a caterpillar with a text-based search to discover in a matter of moments whether the larva was dangerous.

Susan McGregor, a professor at Columbia University’s Graduate School of Journalism, presented InfoScribe, a crowdsourcing tool for transcribing image-based files to make public records more accessible. And Eliot Higgins, the prominent investigative blogger known as Brown Moses, held a seminar detailing the tools he has used to map analyze weapons in Syria and Ukraine. He took the audience through examples using google maps, google image search, youtube and crowd sourcing technology to help verify the authenticity of social media posts and the provenance of weapons.

For two hours, participants used a variety of advanced tools and company databases to reveal the locations, shareholders, formation agents and other relevant information connecting British companies to millions of dollars in suspicious money transfers.

Groups presented the information they unearthed, revealing vast instances of companies purposely shrouding their true ownership and the ultimate recipients of money transactions. No group could identify the ultimate beneficiary of a single transaction, highlighting the ease in which the UK can serve as a haven for shell companies and illicit money transfers.

Monday’s “Investigathon” was the first in what will be a number of subsequent events bringing together journalists and other relevant parties together to discover organized criminal activities abetted by UK companies and laws.