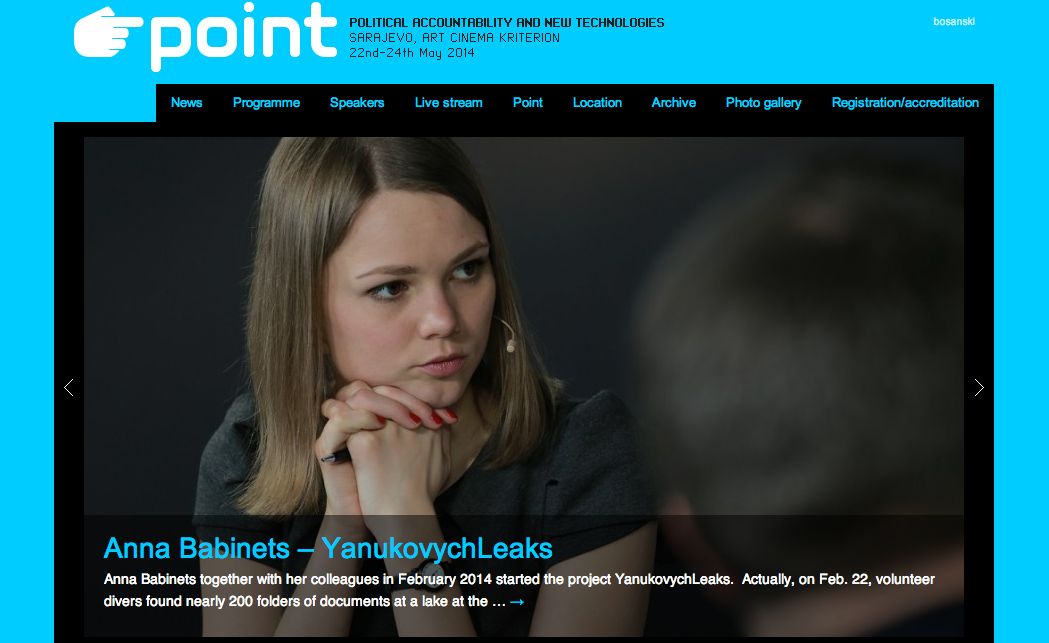 At the Point Conference that opened in Sarajevo Thursday, investigative journalist Anna Babinets told a rapt audience how a team of journalists recovered and analyzed more than 20,000 documents former President Viktor Yanukovych had hoped to hide.

The documents were discovered tossed into a lake at his opulent residence located about 20 kilometers from Kiev. Experts told the journalists the water-damaged documents needed to be quickly dried and digitally scanned to prevent them from being lost forever.

Babinets said this set off days of feverish activity by what quickly grew to be a team of scores of journalists, civic activists and IT experts, including members of the Organized Crime and Corruption Reporting Project.

The result was YanukovychLeaks which launched an upgraded version on Thursday as Babinets was speaking. The website features stories culled from the documents, as well as the salvaged documents themselves.

Since its launch, more than 5,000 other documents have surfaced from various agencies and individuals eager to expose what was going on during Yanukovych’s administration.

The documents detail what is now public knowledge: Yanukovych had spent years using public money to build and decorate his residence, spread out on 345 acres of land. Babinets called it his biggest project during his time as president-- a lavish residence for himself and his buddies where journalists were not welcome.

The amenities included a sauna, which came in handy for the team of investigative journalists, who used it to dry the incriminating documents.

Next month the estate once off-limits to journalists is to host a conference on investigative journalism, digital activism and leaked information, called the Mezhyhirya Festival.

Babinets said the project’s biggest impact may be that it will pave the way for a new, better system of governance in Ukraine, providing citizens with tools to keep government honest. Many people were empowered by the discovery of the documents and subsequently publishing them online for all to see, she said.

Dmytro Potekhin, a consultant on non-violent resistance, said the site’s lasting impact may be that it engages people to take action and suggests actions for change.

The speakers agreed that knowing that corruption exists in a country is not enough:  evidence and proof is necessary to convict corrupt leaders and governments, and the database of the YanukovychLeaks website is a step in that direction.